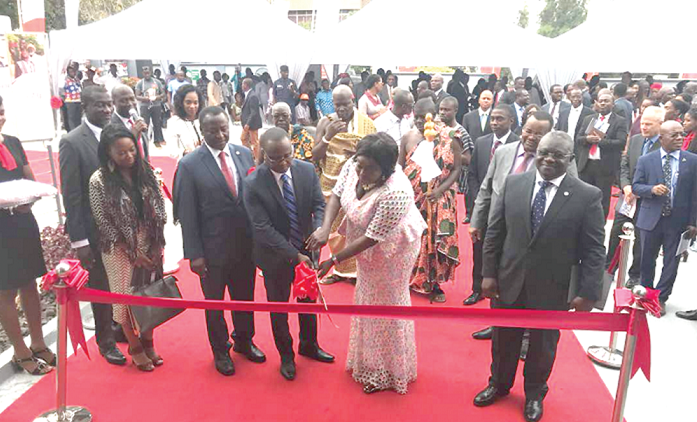 The government has initiated steps to bridge the gap in housing deficit at about 1.7 million with the adoption of a two-pronged approach to mobilise funds domestically and internationally to support the housing sector.

Subsequently, it has directed the Social Security and National Insurance Trust (SSNIT) to provide financial support to the housing sector.

It is also considering mobilising funds through various instruments such as housing bonds for the housing sector, most probably through the National Housing Fund (NHF).

The Deputy Minister of Works and Housing, Mrs Freda Prempeh, who announced this at the launch of GHL Bank in Accra last Thursday, explained that SSNIT would soon invest substantially in the housing sector.

“With regard to external investment, the ministry has concluded several agreements with potential investors notably, a joint venture between SSNIT and other real estate companies,” she said.

She observed that the role of the government in a liberal economy was to facilitate access to the various resources inputs required for housing development and encourage deep private involvement in the provision of shelter for the citizenry.

“Since this government took office, much thought and effort have gone into reviewing the housing situation and how to provide viable and sustainable solutions to address the housing crisis,” she said.

Mrs Prempeh explained that building a safe house was a treasured ambition of the rural and urban dweller since its impacts on the social, health and economic status was not only for the house owner but also all those who depended on him or her.

“For the individual household, it should be expected that home ownership would mean much more than just shelter,” the deputy minister stated.

She observed that the current housing needs assessment had shown a deficit of about 1.7 million units in the country and an annual required supply of about 170,000 units.

That, she said, showed a high potential that should attract private sector investment in the development of residential houses and commercial housing.

“It is the inability of the private sector to close up this gap that is why the government is, therefore, compelled to involve itself directly in the building of affordable houses for workers throughout the country,” she said.

Currently, the yearly demand for housing is hovering around 1.7million, meaning 700,000 units of houses are needed annually to meet this demand. And the required investment needed to meet this annual demand is estimated at between US$51.8 billion and US$52.5 billion over a period of 10 years.

Mrs Prempeh observed that housing was a very capital-intensive industry which required careful planning and the investment of huge resources.

“The prospective house owner’s headache starts with land acquisition through purchase of building materials to labour,” she added.

She opined that majority of people in the country faced critical access to each of these and would have wished to turn to mortgage loans to build, purchase or maintain their houses, but there lay the missing link.

“First Ghana Building Society, the erstwhile Bank for Hosing and Construction, Commercial Banks in Ghana and lately, the Home Finance Company (HFC) all failed to provide the much-needed long-term housing development financing on a sustained basis, especially to the poor in both urban and rural communities in the country,” she said.

Given the financial complexity of the housing market, she observed that a strong collaboration was needed to blend or mend resources and skills to effectively address housing finance products.

She said such collaborations was also needed to reach low-income earners and the urban poor to own at least their residential houses and upgrade their slum communities.

Mrs Prempeh indicated that the development of a housing finance system, capable of financing shelter for majority of the population required a three-pronged approach.

“This approach includes the mobilisation of resources at national and beneficiary level; the creation of financial assistance, the development of loan and savings schemes adapted to the needs of low-income groups,” she said.

She said the government established Home Finance Company (HFC) to address the absence of mortgage finance in the system. — GB