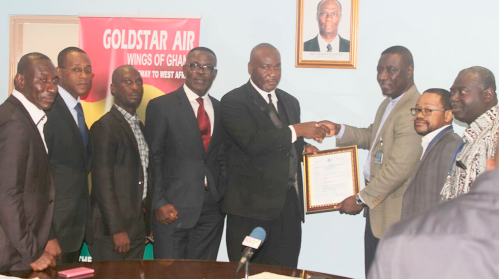 The Chief Executive Officer of Goldstar Air, Mr Eric Bannerman, has pledged the commitment of the company to make air travel to key destinations across America, Europe and the west coast more affordable and convenient for Ghanaians among others. According to his, the company was ready to transform the aviation industry, using strategic measures to cut operatiomnal cost and to give more value to customers who use the company’s aircraft.

Mr Bannerman made the pledge in an interview with the Graphic Business on December 15 after Goldstar Air, a wholly- owned Ghanaian company received its Air Carrier Certificate from the Ghana Civil Aviation Authority (GCAA) to operate scheduled and non-scheduled flights to 12 destinations across the world, including Baltimore in United States of America and Gatwick in the United Kingdom.

The company, which is awaiting its Air Operators Certificate to enable it start full operations by the second quarter of next year, is also expected to fly to nine other destinations including Guangzhou, Dubai, Monrovia, Lagos, Abijan, Freetown, Dakar, Conakry and Banjul.

According to Mr Bannerman the company will have a number of aircrafts to ensure that there are some on standby at all times.

“What is even more refreshing for our fellow Ghanaian businessmen and women who travel to China and Dubai is that, we will be the first to fly directly from Accra to Guangzhou in China and the second to fly directly to Dubai”, he added.

Mr Bannerman described the feat chalked up by the company as most refreshing and unique and even promised that the management would ensure that flights were on time.

The entry of Goldstar into the already competitive aviation market, particularly on the American and London routes is expected to stir up the industry to bring more benefits to travelers in terms of services and fares.

Mr Bannerman said “after studying the market over the year, we have realised that Ghanaians travel heavy and therefore we have made adequate provisions to cater for their needs”.

He said the company, in its quest to meet the flying needs of Ghanaians, will allow three bags of 23 kilos each on board per passenger unlike the industry’s allowance of only two bags.

“The three bags will be without the hand luggage and that, as I said, is being done to enable Ghanaians have the opportunity to travel heavy at no extra cost”, he said.

Mr Bannerman said the cabin crew will be purely locals.

“We will not have any foreigner onboard because we have many qualified cabin crew in Ghana and they will be used”, he said “adding that they will also be trained to sell Ghana wherever their destinations are”.

Mr Bannerman said while on board, Ghanaian dishes would be served while local movies would be shown as a way of showcasing the Ghanaian culture to the rest of the world.