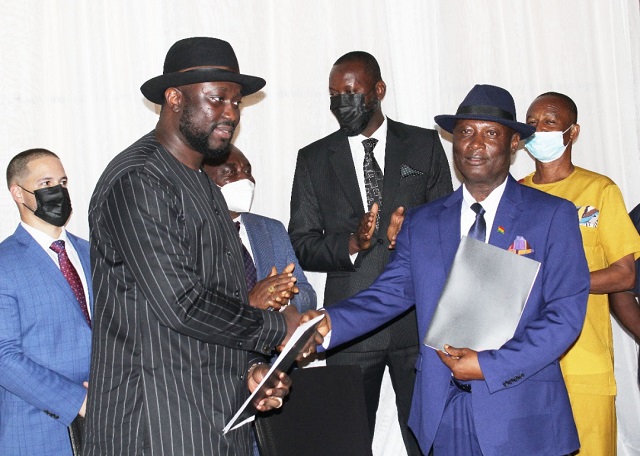 One of Ghana’s leading gold exporters, Goldridge Ghana Limited has signed an agreement to provide the Ghana National Association of Small Scale Miners (GNASSM) and its members logistical support to enable them formalise their operations and increase productivity.

The deal will see the miners operate in safe and friendly environments with the peace to focus on achieving higher production volumes.

GNASSM members who take advantage of the packages in the contract will have access to finances from Goldridge and in return, channel their gold to the Goldridge refinery. Goldridge will then export the refined gold to legal international markets.

Speaking at a short ceremony in Accra during which the parties appended signatures to the agreement, Chief Executive Officer and Chairman of Goldridge Ghana Limited, Dr Sledge Nana Yaw Duodu expressed his excitement over the consensus reached by the two bodies to work hand-in-hand to improve the mining sector and affect its upstream positively.

He said one of the reasons why Goldridge was set up was to promote Ghana as the leading producer of gold in Africa and he is excited that finally such an agreement has been signed to give the sector a major lift which will be beneficial to all stakeholders.

“All Ghana gold miners deserve to be recognized and receive fair pay. I have made it Goldridge’s mission to unlock the full value of our gold sector through driving formalization of mining operations, responsible practices, propelling in-country refining and accessing global markets”, he said, adding that the signing of the agreement paves the way to the realization of this important transformation.

“Together with GNASSM, we have set up the perfect partnership where the association brings the miners and Goldridge brings the means to set up the entire value chain”, Dr. Sledge Duodu said.

He said the small scale mining sector in Ghana produces about 50 tonnes of gold yearly and since Ghana is the number one producer of gold in Africa, Ghana needs to be recognized internationally as a gold hub.

“Underpinning the Agreement and the Program is a traceability and due diligence system from mine site to global markets that the partners are developing according to international standards, and with which the miners and Goldridge will have to comply. Each and every single one of the Program’s components is crucial to its success: formalization; responsible mining practices; due diligence; traceability; in-country refining; and export to global markets, all up to internationally recognized standards. If one component is missing or not up to standard, the value chain cannot be recognized internationally. When it all works, it will fully benefit gold miners and their communities. Small-Scale Gold Mining will become a significant contributor to Ghana’s socioeconomic development, and the country will reap the full value of its precious resources”, Dr. Sledge Duodu explained.

“Goldridge is taking a lead role in Ghana’s transition from raw gold producer to refined gold producer. This is a key component for the country to fully benefit from its precious resources. We have started building a refinery in East Legon which is expected to be completed middle of next year. It is a 500kg per eight hours shift meaning if we run two shifts, we can refine 1,000kg every day. Ghana’s total output is about 150 tonnes and out of this, 50 tonnes is produced by the small scale miners. This refinery is not being built to refine only the gold from small scale miners but also large scale miners in the country and also West Africa,” he explained.

GNASSM
President of GNASSM, Mr. Philip Kwasi Akufo explained what signing the agreement meant a lot to the association and its members giving how eager they all are to improve their productivity.

He said Ghana has a population of hard-working and highly-skilled miners, adding that GNASSM’s membership is close to 2,000 mining operations and involves an estimated 1.8 million individual miners.

Mr. Akufo said all small scale miners are willing to further improve their practices so they can access international markets, improve their working conditions and livelihoods since they lack access to training, equipment and financing.

“GNASSM is thrilled to partner with Goldridge. Dr Sledge is highly respected by miners, governments and Ghanaian institutions. He brings leadership, the vision to transform the sector and has the means to make it happen. Already many non-members are looking to join the Association to enrol in the Program. This is going to be transformational”, Mr. Akufo said.

General Secretary of GNASSM, Mr. Godwin Armah who expressed the hope that the agreement will positively impact the fight against galamsey, said one of the missions of the association is to ensure that mining is done in a more sustainable way and to ensure that illegal miners are attracted to adopt approved practices.

“The agreement is about Goldridge supplying Small Scale Miners with the requisite technology and equipment that we need to use to recover our gold and ensure that the environment is intact”, he stated.

He said the agreement will also see to it that the small scale miners can track their gold upstream, adding that the agreement has been in the pipeline for a long time. He was excited that the two bodies have finally agreed to work together for the benefit of the country and other stakeholders.

“We are happy to sign this agreement. This is something we have deliberated on with Goldridge for a very long time and we want to add value to gold so that our jewelry industry will get the pure carat that they want in order to meet international standards.

“We are looking forward to take advantage of whatever will come out of the agreement between Goldridge and GNASSM. Ours is more like what makes the industry flourish and what we produce is what gets the international market to know we have quality gold in this country. So we are truly excited about this. We think this will help us and strengthen the entire industry.”