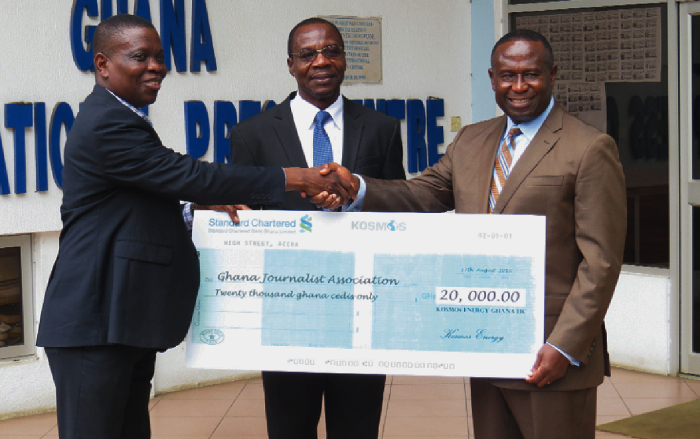 The General Secretary of GJA, Mr David Agbenu, has commended Kosmos Energy for its consistency in its support for media work in the country and assisting the association to promote journalism excellence.

The GJA general secretary said it was very important strengthen the collaboration at all levels to avoid information asymmetry but to allow professional dissemination of information.

Speaking after receiving a cheque for GH¢20,000 to support this year’s GJA Awards ceremony, Mr Agbenu said the media should not be seen as an antagonistic entity, but rather a development partner that discharges its duties to advance the course of society.

The Vice-President and Country Manager of Kosmos Energy, Ghana, Mr Joe Mensah, who presented the cheque on behalf of the company, called on the GJA and its members to continue to work closely with the corporate world to ensure convergence on issues that would better inform the public.

He said Kosmos would continue to strengthen its relationship with the media, saying “as the media, you have the greatest privilege and responsibility of reaching out to the masses with credible information.”

The GJA set up the awards scheme over two decades ago to reward excellence in media practice and many companies, including Kosmos Energy had been associated with it since it set up in the country.

In the past, Kosmos had supported the anticorruption category of the awards. This year, it has added the ‘Agribusiness category” in view of transformational social investment project the oil producer has initiated.

Known as the Kosmos Innovation Centre (KIC), it seeks to support the transformational development of various sectors of the Ghanaian economy, with agriculture being the inaugural pilot project.

Under the project, Kosmos wants to empower the youth to adopt innovative ideas to solve developmental challenges in country.

“We as individual groups cannot take on this task in isolation, we need to work together with the media as a team as we achieve our goal to build our nation,” Mr Mensah said.

He added that Kosmos Energy would also encourage transparency by engaging the media through workshops about oil and gas and well as other areas to promote professional journalism.

The Kosmos vice president therefore commended the GJA for its continuous recognition of professionalism through the awards scheme and congratulated the winners in advance and the entrants of the award, which will be held at the weekend