Time to join the ‘Christmas Club’ 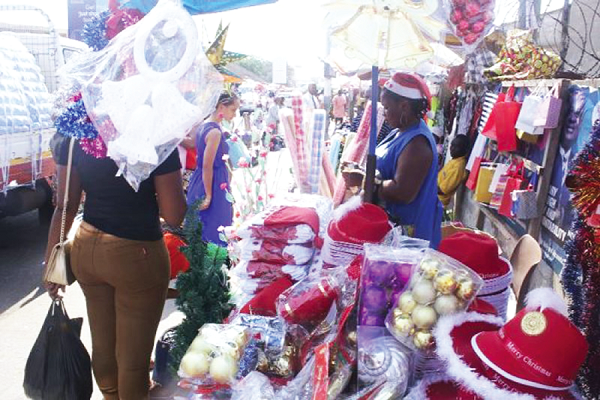 In the Christmas season, many are forced to shop in their quest to be a part of the celebrations
30.5k Shares

Just before the start of the Yuletide, a Financial Consultant and Managing Partner of Trust Consult, Mr Charles Mensah, advised employers and employees against the temptation of borrowing from the banks to pay Christmas bonus or for Christmas spending.

According to him, the impact of such a move on the business and oneself in the following year could be dire if care was not taken to manage the situation in the New Year.

The advice comes at a time when many companies, most of which are noted for paying Christmas bonuses as a ritual, refused to do so last December because of lower profits or losses recorded in the year.

The development tempted some of their employees already used to the practice of taking bonuses annually, to resort to borrowing to make up their budget for the season.

To many, December is full of merrymaking because it is the month of Christmas. More parties and more fun. In spite of the cost involved, many do not fear spending a fortune to ensure that they and their families have the best of the Yuletide.

Christmas is one day, December 25, but it is amazing the expenditure that comes with preparation for that day. The shopping budgets swell to an extent that others end up in debt in the New Year, particularly within the first quarter of the year.

Call it reckless or a spending spree but that culture has been with us for centuries because it is as if, without showing off in a way, one will not be seen to belong.

Then comes the month of January as we find ourselves in now. January is often a dreaded month. It is the month that unlike the rest of the months in a year, moves slower because it is five weeks and many are almost always found wanting because there is often very little to cover huge bills.

It is a month in which suddenly, reality dawns and the patience of breadwinners are tested to their limits.

There are always bills to settle – school fees and other expenditure bordering on education, rent, among many others.

But there is a way to make Christmas more enjoyable to an extent that January does not become a nightmare.

All one has to do is to join the Christmas Club at the beginning of every year.

A Christmas club, also called a holiday club account, is a type of savings account in which people make routine deposits throughout the year.

The accumulated savings are then withdrawn before the holiday season to provide funds for holiday shopping and other expenses including travel with the entire family on a dream holiday.

These accounts can help those who engage in it avoid financial stress associated with holiday shopping and other related expenses. Saving this money throughout the year can also help keep consumers enforce a holiday budget, and avoid going into debt to pay for gifts.

People in this club also avoid falling in the hands of loan sharks who are always on standby to bait the unsuspected with money at high interest rates.

The Christmas Club is not for a group of people and, therefore, one should not join others to save as a group. That could be a recipe for potential conflict.

It is a club but usually for one or for a couple. In this case, it could also be for a company which is keen on paying bonuses to show appreciation to its staff. All it needs to do is to set aside portions of their monthly profits for that December fever.