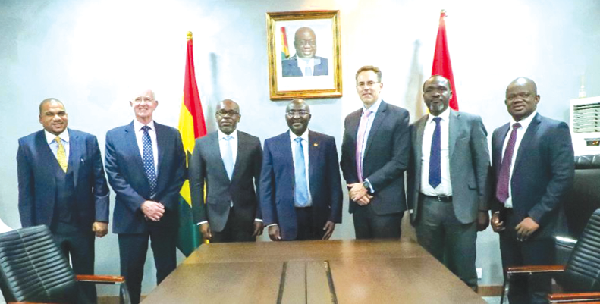 The Chief Executive Officer, Business and Commercial Clients at the Standard Bank Group, Bill Blackie, has reiterated the bank’s commitment to the growth and development of the African continent.

Mr Blackie said this when he led a delegation from the Standard Bank Group to pay a courtesy call on the Vice-President, Dr Mahamudu Bawumia, at the Jubilee House as part of a three-day working visit to Ghana.

According to the Standard Bank CEO, the focus on Africa’s development was in keeping with the bank’s purpose and a relentless determination to see Africa thrive.

“Over 160 years ago the bank had an aspiration of building a global company but after a while, we realised that we needed to focus on our home, which is Africa and channel our resources, capital and expertise into driving its growth. Since then, we have committed to a capital energy that vitalises our African franchise in ways that ensure that we are contributing to the growth of the 20 African countries that we currently operate in,” he said.

He also mentioned some of the initiatives that the Group’s franchise in Ghana, Stanbic Bank, has been engaged in as part of its support to the Ghanaian economy.

“In Ghana, we continue to support government’s industrialisation drive because we appreciate the importance of industrialisation in growing African economies. We have done this by funding key initiatives in the country,” he added.

For his part, the Vice-President lauded the decision of the Standard Bank Group to focus on Africa and also shared some government initiatives that would spur growth in the country.

Dr Bawumia said: “I appreciate the focus of the Standard Bank Group on the African continent. That focus is not misplaced because of the potential of the continent if we get the right pillars in place to drive growth. In Ghana, there have been many reforms that are targeted at making the economy stronger. The banking sector clean-up in 2017, for instance, was done to protect the sector and the data post the clean-up suggest that the sector is stronger”.

The Vice-President further mentioned that the government’s digitisation agenda was aimed at building an economy of systems and data upon which the real sector of the economy would have firm grounding.

“Previously, people could take loans and disappear without a trace but now with the Ghana Card, which is linked to your bank account and your digital address, banks can locate everyone who takes loans from them. The Ghana Card number is also a tax identification number, which also allows the expansion of the tax net because everyone with the card will now be identified as a taxpayer,” Dr Bawumia said.

In his remarks, the Chief Executive of Stanbic Bank Ghana, Kwamina Asomaning, thanked the Vice-President for his efforts towards digitising the economy and assured him of the bank’s support.

“We at Stanbic Bank are very appreciative of your efforts in driving the country towards a digital economy. One of the challenging issues in the banking sector is that it is easy to change identities resulting in high defaults in loan repayments. But now opening accounts with the Ghana Card helps in validating identities.

“Stanbic Bank has always been very supportive and responsive to government initiatives and we promise to continue doing that going forward.”