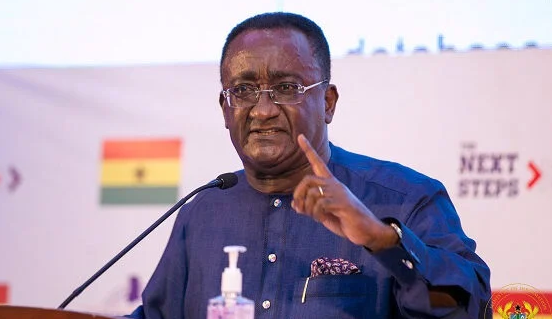 This means, an amount of GH¢660 per bag of 64 kilogramme gross weight will be paid and takes effect from October 8, 2021 when the new cocoa season begins.

This was announced by the Minister of Food and Agriculture, Dr. Owusu Afriyie Akoto, after the Producer Price Review Committee on cocoa in Accra.

He said the government decided to maintain the farm gate price despite the effect of the COVID-19 pandemic which saw the prices of cocoa on the international market plummet.

He said the price represented 87.15 per cent of the Free On Board (FOB) value and was the highest within the sub-region.

“This demonstrates government’s commitment to sustain the interest of the cocoa farmer in producing cocoa and also to improve the well-being of cocoa farmers.

The producer price was maintained when all cocoa producing countries are contemplating a reduction in their farm gate prices, following a slump in the terminal cocoa market as a result of the COVID-19 pandemic,” he stated.

Dr. Afriyie Akoto said the committee had also approved the rates and fees for all stakeholders in the supply chain.

These include the buyer’s margin, hauler’s rate, warehousing and internal marketing costs, as well as fees for disinfection, grading and sealing and scale inspection.

The minister, who is the Chairman of the Price Review Committee, also noted that through the Ghana-Cote d’Ivoire Cocoa Initiative, the two countries have continued to implement the Living Income Differential which was helping to improve the welfare of cocoa farmers in both countries.

“It is significant to note that today, cocoa farmers in Ghana and Cote d’Ivoire are better off than their counterparts in other cocoa producing countries as a result of this noble initiative.

“We are also happy to announce that the government, will in 2021/2022 season, implement the Cocoa Farmers pension scheme,” he pointed out.

He said this would ensure sustainable livelihood of the cocoa farmers after they retire from active cocoa farming.

To further assist farmers to enjoy the full benefits from their investments, he said the government had also introduced a uniformed non-adjustable electronic weighing scale for the purchase of cocoa.

He said the use of the digital scales would take effect from October 8, 2021.

“We advise all Licensed Cocoa Buying Companies (LBCs) to cooperate with the Ghana Standards Authority to set up the scale and use them to weigh the farmers cocoa,” he stated.

The minister also gave the assurance that the government would continue to support cocoa farmers through the pests and disease control programme, hi-tech, pruning, hand pollination and cocoa rehabilitation.

He said the government had committed itself to continue to supply certified planting materials that were drought tolerant, early bearing and high-yielding.

He said the implementation of these productivity enhancement programmes resulted in the achievement of a record production of 1,046 million tonnes of cocoa beans for the 2020/2021 season.

Dr. Afriyie Akoto also assured farmers and all stakeholders that the Ghana Cocoa Board had made available funds, jute sacks and all related logistics for the smooth take-off of the 22021/2022 main crop season.