Graphic Business/Stanbic Bank Breakfast Meeting: Experts on how to avoid return to IMF 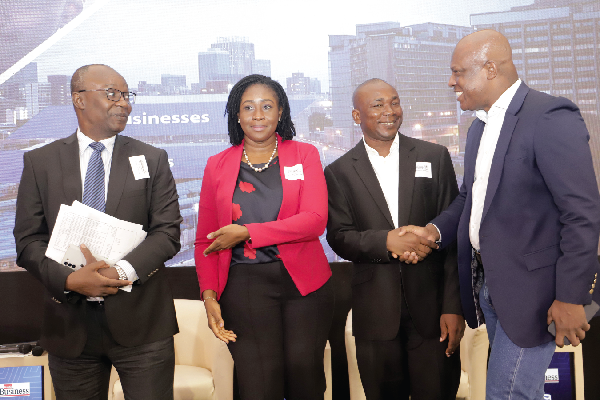 For the fourth time this year, the Graphic Business/Stanbic Bank Breakfast Meeting brought together some of the fine brains in the country to deliberate on how to quicken the country’s recovery sustainably.

Held on the theme: 17 Times too many! What do we need to stop doing and start doing as a people?” the forum afforded the expert panel and participants the opportunity to diagnose the factors that pushed the country into the arms of the International Monetary Fund (IMF) on 17 occasions and how it can avoid a return.

It followed ongoing efforts by the government to close a deal with the IMF to help stabilise the economy.

It was chaired by an economist from the Economics Department of the University of Ghana, Legon, Dr Priscilla Twumasi Baffour.


Among other things, the experts called for sustained fiscal discipline, prudent management of resources, aggressive resource mobilisation and the need to reform the economy around agriculture.

Below, we provide the key points from the event, which was also an avenue to solicit views on the 2023 budget.

The forum was opened by the Managing Director (MD) of the Graphic Communications Group Limited (GCGL), Ato Afful, who identified agriculture and its value chain as a lever to stimulate the rest of the economy.

Consequently, he urged the government to use the impending IMF programme to restructure the economy around agriculture and agro-processing to make it more sustainable.

“Agriculture broadly, and agri-processing specifically, can act as a lever to assist in stimulating the rest of the economy because it creates demand for fixed goods, public goods, road networks, infrastructure, such as storage facilities, processing plants, harbours, among others.

Throwing more light on his call, Mr Afful said: “Agriculture can act as a catalyst to stimulate investment in these sectors, which will trigger other sectors in the various communities.”

He was of the strong belief that at the individual and or working group/cooperative level, beneficiaries of strategically targeted intervention programmes, consistently applied and reviewed for efficiency, had the direct benefit of being able to support themselves, feed their families, collaborate with others and provide education for their children.

“My view is, and it is invariably proven: when people are fed and kept busy, the noise will be filtered out,” he said.

“We need a lifestyle change, backed by real commitment and an endurance to stick to a plan that delivers this mandate,” he added.

The Chairperson of the event said it was not surprising that the country was on the verge of its 17th programme since 1966.

She said it was obvious that the country needed to build a resilient import-substitution economy to be able to wean itself off IMF programmes.

She said it was interesting that not much in that regard was being done, leading to increased imports of almost everything, including animal intestines.

“I believe the buck stops with leadership,” Dr Baffour said, noting that the country could use policy to curtail imports and encourage domestic production.

Prof. Bokpin said the country did not need new or higher taxes to increase revenue mobilisation.

He said although the country’s tax-to-Gross Domestic Product (GDP) ratio was low, compared to its peers on the continent, the issue had more to do with compliance and not policy.

“Our tax-to-GDP ratio is less than 13 per cent, so considerably one would logically suggest that we introduce new taxes. But I will say no. If you look at our tax potential, we can do between 24 and 25 per cent of GDP,” he said, and attributed the shortfalls to gaps at the administrative and compliance levels.

Prof. Bokpin said to close the gap, there was the need to look at the implementation arrangement surrounding VAT.

“If you pick direct income tax, just about 2.4 million pay that, out of an estimated 13.7 million labour force. The way to close that is through efficiency,” he said.

Dr Kumah, who is an international economic consultant, called for an independent body of experts to help instill fiscal discipline by ensuring that the government strictly complied with its economic programme.

The former Resident Representative of the International Monetary Fund (IMF) said the new body must be given legal powers to whip finances in line, as part of efforts to stop the recurrent fiscal slippages and the resulting resort to the Bretton Woods institution for bailouts.

“Whenever we have a programme with IMF, we always behave but when we go outside the programme, our fiscal situation misbehaves. So, clearly, there is something that we need to institutionalise.

“I do not know where you will put this organisation but we need something, maybe extra presidential, that says that after a programme, it will have the authority to look at every budget and programme to make sure that all targets are met.

“That to me, is our major problem,” he said.

“Many Ghanaians may say it is not right to have a body that is not elected to be supervising our finances but I am afraid to say that the 17 times at the IMF suggest that we need to think seriously about how to resolve this permanently,” the former Board Chairman of the Standard Chartered Bank said.