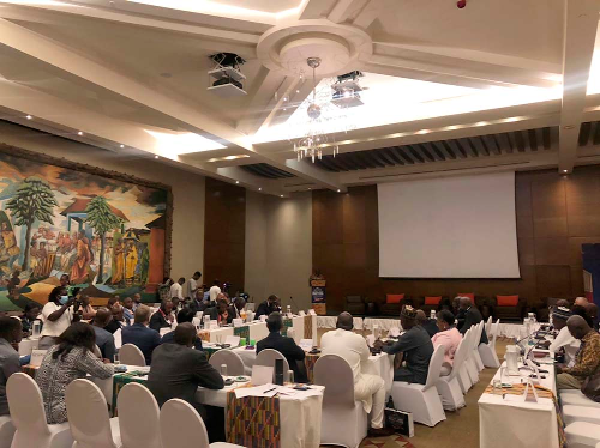 Participants at the workshop
30.5k Shares

The Vice-President, Dr Mahamudu Bawumia, has said there is a compelling need for the maritime sector to formalise actions to combat bribery and corruption in a bid to ensure fair trade.

He explained that the industry was exposed to the risk of many forms of corruption which had damaging effects on trade and investment.

Dr Buwumia who made the call last Thursday in a speech read on his behalf at the opening of the Global Best in Vessel Clearance Workshop in Accra said the lack of transparency in Import and Export Licensing as well as with other regulatory requirements which make movement of goods time consuming, burdensome and expensive contributed to corruption in our Ports.

The workshop organised by the Maritime Anti-Corruption Network (MACN) and the Convention on Business Integrity (CBI) in partnership with GMA brought together maritime experts from six African countries to deliberate on new trends in best practices in vessel clearance at seaports.“

The Ghana Revenue Authority for instance estimates that Ghana loses more than $8.3 million monthly in revenue through corrupt practices at our Ports.

This figure amounts to almost $50 million every six months and a $100 million annually.

“These loses are due in part to the deception by some Importers who deliberately wrongly declare contents of imported containers with some Port Officials aiding in this deception,” he said.

That in turn, he said had negative effects on social, economic and sustainable development as well as a country's risk and integrity rating, potentially impacting on foreign direct investment.

Hence, it was vital for all Stakeholders in the Ship/shore interface to embrace and implement anti-corruption practices and procedures.

Nature of shipping industry The Deputy Director-General of Finance & Administration at the Ghana Maritime Authority (GMA), Yaw Akosa Antwi, said corruption in the maritime industry will persist due to the nature of the shipping industry.

“This fragmented and impervious nature of the shipping industry makes fighting corruption difficult as it portends a multidimensional challenge that requires an all-inclusive solution.

It is therefore essential for the public and private sector as well as other actors to collaborate and align standards thereby mitigating the corruption risk,” he said.

For his part, the Associate Director for Global Operations & Industry Engagement at the Maritime Anti-Corruption Network, Vivek Menon, said despite last year's drop in piracy incidents, approaching West-African ports were still considered a high-risk and a global concern for the shipping industry.He said the African Continental Free Trade Area (AfCFTA) agreement had opportunities for Africa to boost intra-African Trade and integrate into the global economy.

However, for AfCFTA to be successful, it was crucial that the continent had an efficient and reliable transport system in place.

“This is where the new port of Tema can be part of inspiration to extend the necessary infrastructure, services and capacities to support the “Let us work together to harness the potential of the blue economy for Africa, ensuring that any obstacles to realising its potential will be eliminated,” Mr Menon said.