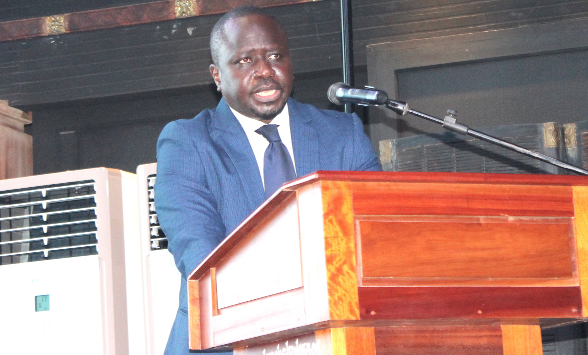 INFLATION for food and non-alcoholic beverages has maintained and deepened its dominance over non-food inflation for the second month running.

Figures released by the Ghana Statistical Service indicated that inflation for food and non-alcoholic beverages increased from 17.4 per cent in February to 22.4 per cent in March.

This was higher than 17 per cent recorded by the non-food sector.

Announcing the March figures, Government Statistician, Professor Samuel Kobina Annim, said the economy also witnessed a reversal of the dominance of housing, water, electricity and gas, as the transport sector recorded the highest rate of inflation of 27.6 per cent.

On the regional basis, the Brong Ahafo Region recorded the highest inflation rate of 23.1 per cent which was higher than the national average.

However, the Upper East Region recorded the lowest inflation of 12.5 per cent.

The rate at which prices of goods and services increased over time (inflation) reached the highest level in the month of March, this year

Largely driven by the consistent increase in the cost of transportation and food prices, the March inflation rate ballooned to 19.4 per cent, up from the 15.7 per cent recorded in February.

The rate is the highest recorded in the country since August 2009 when the country’s inflation rate exceeded 20 per cent.

It is also the seventh consecutive month that the country’s inflation has exceeded the Bank of Ghana’s target of eight per cent plus or minus two per cent, a development which has ignited calls on the monetary policy regulator to revise its forecast in tandem with the realities of time.

Professor Annim said the major driver of last month’s inflation was the transport sector which recorded an inflation rate of 27.6 per cent.

This was followed by food inflation which recorded an inflation rate of 22.4 per cent, up from 17.4 per cent in February and largely due to the rise in food prices.

The rise in food prices has been largely attributed to the Russia/Ukraine conflict which has led to shortages of fertiliser and some food products.

The Managing Director of the International Monetary Fund (IMF), Kristalina Georgieva, had earlier warned that Africa was more vulnerable to the negative economic impact of the Russia/Ukraine crisis, noting that the crisis would lead in increased food prices on the continent.

Unlike the services, industrial, maritime and aviation sectors which suffered massive declines in growth in the heat of the pandemic, this time, the hardest hit sector is agriculture.

This is because Russia and Ukraine account for a quarter of the world's wheat exports, including at least 14 per cent of corn exports in 2020 and a joint 58 per cent of global sunflower oil exports in the same year.

Fertiliser, which is heavily used by farmers in Ghana and Africa, is imported from Ukraine and Russia.

Already in Ghana, for instance, the subsidies on fertilisers to the farmers have dropped drastically from 36 per cent to only 15 per cent.