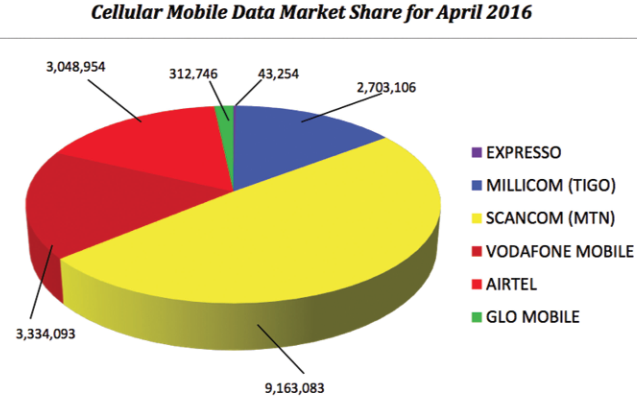 Five out of the six telecom companies providing cellular mobile data services in the country lost grounds in both their market share and subscription numbers according to the April market share statistics released by the industry regulator, National Communications Authority (NCA).

The companies are Vodafone, tiGO, Airtel, Glo and Expresso.

The total number of subscribers for Vodafone’s mobile data decreased in April 2016 as it registered a total subscriber numbers of 3,334,093 as against 3,390,27 in March the same year. The April figures reflected a market share of 17.92 per cent, down from18.02 per cent in the period under review.

Expresso’s mobile data subscriber figures which at 44,136 at the end of March fell to 43,254 at the end of April. However, its market share stayed same at 0.23 per cent for the month under review.

MTN Ghana, which recently introduced its Fourth Generation Long Term Evolution (4G LTE) was the only gainer in the month under review.

The mobile data subscribers of the telecom giant for April 2016 went up to 9,163,083 as against the March figure of 9,066,405. This also resulted in the increase in its market share for the month under review to 49.25 per cent as against the figure for March which stood at 48.19 per cent.