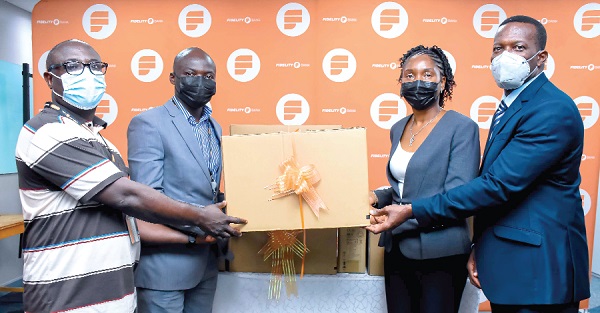 Godfred Attafuah (right), Director, Channels and Sales, and Nana Esi Idun-Arkhurst (2nd from right) presenting one of the desktop computers to Felix Akpah (left), Headmaster of SMASCO. Looking on is James Kwasi Oberko (2nd from left), a tutor at the school Follow @Graphicgh

The bank also donated student desks to the Police Public Safety Training School at Pwalugu in the Upper East Region to support effective teaching and learning.

In a release issued by bank on Monday, it said the gesture was in response to the school’s request for help to furnish its ICT lab with computers to facilitate ICT education for students.

Presenting the desktop computers to the school, the Divisional Director for Retail Banking at Fidelity Bank, Nana Esi Idun-Arkhurst, said it was a privilege to support the community and more importantly, contribute to the acceleration of digital growth in the country.

“Fidelity Bank understands that as the world is moving faster than ever towards digitisation, it is crucial that no one is left behind. The donation of these computers to SMASCO, is a step towards digital inclusion and it is our hope that this gesture will positively impact the lives of students at SMASCO,” she said.

She added that Fidelity looks to replicate this and other social impact projects in the educational sector as part of its 15th anniversary celebrations.

“On behalf of the Governing Board and Old students of SMASCO, I wish to express my profound gratitude to the management of Fidelity Bank for responding positively to our request.