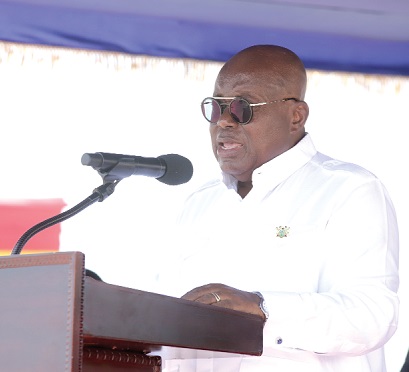 President Nana Addo Dankwa Akufo-Addo has explained that the government was implementing a number of key policies, including the introduction of the Electronic Levy (E-Levy), as part of a broad number of interventions to hasten economic recovery from the ravages of the coronavirus pandemic.

“We have introduced measures to improve fiscal consolidation and ensure debt sustainability, which are critical to achieving macroeconomic stability in the short to medium-term.

“These measures, such as the passage of the E-Levy Bill, have not been introduced in isolation. They have come on the back of a revenue loss of GH¢13.1 billion, and an increased, unbudgeted expenditure of GH¢14.2 billion,” he said while addressing this year’s Workers Day in Accra last Sunday.

The President said the revenue loss coupled with the unbudgeted expenditure had resulted in an overall fiscal impact of “some GH¢27.3 billion, representing 6.8 per cent of Gross Domestic Product (GDP)”.

While further trying to convince the nation about why the need for some of what has been described as difficult but necessary policy interventions to keep the wheels of the economy running, President Akufo-Addo said: “In addition to this, adverse global developments have impacted severely on the exchange rate and inflation, with the overall effect being the weakening of the real incomes of people in Ghana, just as it’s happening everywhere. That is why the Secretary-General can justifiably list the litany of woes that are adversely affecting the living standards of working people in Ghana and in the outside world – high inflation, high fuel and petroleum prices, escalating food prices and reduced income levels.”

Against this background, the President persuaded labour to work together with the government as partners to hasten the recovery of the economy in the best interest of all.

“We, thus, have to make concerted efforts as partners to hasten our recovery from COVID-19 by finding intelligent ways of bringing everyone on board to contribute their quota, no matter how small,” he said.

Delving into some specifics regarding some of the pragmatic steps taken by the government to reduce expenditure and tighten its belt, the President said: “Indeed, we have had to cut discretionary expenditures of Ministries, Departments and Agencies by 30 per cent, we have reduced the salaries of political appointees by 30 per cent for the rest of the year, reduced their fuel coupon allocation by 50 per cent, and placed a moratorium on the purchase of imported vehicles, among others.”

Making reference to the outcome of the National Labour Conference held earlier this year in Kwahu-Nkwatia, in the Eastern Region, President Akufo-Addo said the platform provided guidance and encouraged the government to re-examine critically the prevailing situation, and proffer strategies and solutions that would help reverse the trend.

“We are witnessing some degree of stability in the macroeconomic data, and we are hopeful of maintaining and building on them throughout the year.

“Protecting jobs and incomes in the era of COVID-19 and beyond is, undeniably, the collective responsibility and duty of all social partners.

This is because incomes earned by workers are a function of jobs created by employers, and of the creation of an enabling environment by the government to help sustain enterprise growth,” he said.

The President further told labour that he was confident that with these measures the government would build the productive capacities of job-creating sectors such as agriculture, ICT, manufacturing, tourism and the green economy to enable them protect, create and increase the jobs and incomes of workers.

President Akufo-Addo renewed his pledge to the country as he resolved to replicate the successes chalked in his first term of office in the last, saying; “We are definitely on the right path, as outlined in the GH¢100 billion Ghana CARES “Obaatan Pa” Programme.

“Government’s historic GH¢10 billion YouStart Programme, to encourage youth entrepreneurship, will be launched by June. Together, they will help transform, revitalise and modernise the economy to enable it return to high and sustained growth over the next two years,” he said.

He said the government was doing so with greater urgency to create job opportunities in different sectors of the economy adding: “We have done it before, and we will do it again. I shall be more than ready to share the progress with you a year on.”

President Akufo-Addo said: “Just as we have worked together to reduce significantly the impact of COVID-19 on lives and livelihoods; and just as we worked together to grow the economy from the 3.4 per cent I inherited in 2016, to an average annual growth rate of seven per cent in my first term, before the pandemic struck, making us one of the fastest-growing economies in the world, so I remain upbeat and optimistic that working together, in all sincerity and transparency, we, the social partners, that is, the government, organised labour and the business community, can help sustain the rebound of the economy, and, thereby, help improve the living standards of all Ghanaians.”