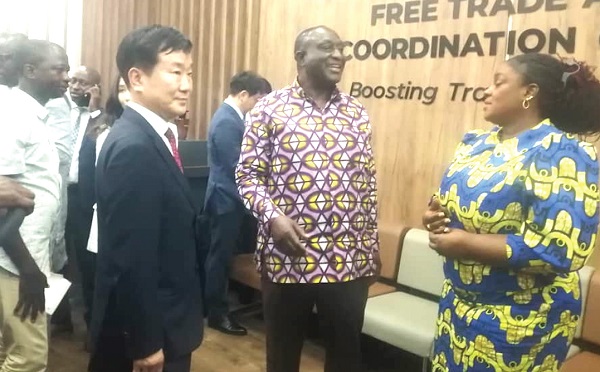 The introduction of an electronic auction platform (E-auction) by the Ghana Revenue Authority (GRA) had boosted auction sale revenue by 30.8 per cent for general goods and 10.2 per cent for vehicles as of the first week of November this year.

Revenue meant to be generated from the auction of general goods increased from GH¢142,640 to GH¢186,640, while revenue expected to be realised from vehicle sales jumped from GH¢1.93 million to GH¢2.13 million for the online auction that ended on November 4, 2022.

Addressing a delegation from the Customs Uni-Pass International Agency (CUPIA) in Accra last Wednesday, the Commissioner-General of the GRA, Rev. Dr Ammishaddai Owusu-Amoah, said the GRA had started seeing a significant improvement in its auction processes with results received from successful E-auction exercises.

“We have executed two successful auction sales and we are expecting the third soon. For the pilot, we got above the reserved price, with an increase of 6.8 per cent, while the main auction for general goods and vehicles jumped to 30.8 and 10.2 per cent, respectively” he said.

The new auction regime replaced the manual auction held for many years which was often saddled with scores of people claiming to be political party foot soldiers asking for favours and advantages to bid for items of their choice.

The E-auction is an addition to the Integrated Customs Management System (ICUMS), a single window platform in deployment for cargo clearance at the country’s ports.

ICUMS is a product of the CUPIA, a customs and business solutions offered by the Korean Customs Service and Ghana Link Network Services Ltd as its technical partner in the country.

The six-member CUPIA delegation is in Accra on a two-day working visit to engage officials of the GRA, the Ministry of Trade and Industry, the African Continental Free Trade Area (AfCFTA) Secretariat and Ghana Link Network Services to further deepen collaboration.

The CUPIA delegation, led by its Chairman, Yoon-shik Kim, signed a memorandum of understanding (MoU) to extend the end-to-end single window platform to other African countries.

The MoU entails the introduction of new models for ICUMS aimed at enhancing revenue and security.

It also involves Ghana Link Network accepting to work with CUPIA to share resources and technology in the West African subregion.

Dr Owusu-Amoah explained that the E-auction was a project under the GRA’s transformational agenda and its aim was to consolidate all processes, leading to the disposal of confiscated goods in an online system.

He said the objective of the project was to increase revenue through an online auction or sale, eliminate fraud related issues associated with auctioning, ensure fairness in the auction process by the participation of the public and avoid risk linked with manual process.

The Minister of Trade and Industry, Alan Kyerematen, who engaged the delegation at a different forum, noted that the government decided to review the entire trade facilitation regime at the ports when it took office in 2017.

He said it was clear that different service providers working on separate electronic platforms then did not augur well for efficiency and effectiveness in terms of trade facilitation in the country.

He said it was for that reason that the government took a decision to select a globally acknowledged respected competitive regime that would enable the country to install an end-to-end comprehensive and fully integrated system.

With initial challenges, he said, the initiative had significantly impacted the government’s revenue mobilisation.

The Chairman of Ghana Link Network Services, Nick Danso Adjei, expressed confidence that the system would help transform the trade facilitation landscape in the subregion and on the continent by making African countries rake in the appropriate revenue at their various entry borders.

He said although there had been some challenges during the initial implementation of the project, all the stakeholders were now satisfied with the performance of ICUMS.

The CUPIA Chairman expressed appreciation to the GRA and all stakeholders for their support in making the implementation of ICUMS successful in the country.

He said Korean Customs would deepen its relationship with the GRA for mutual benefits.