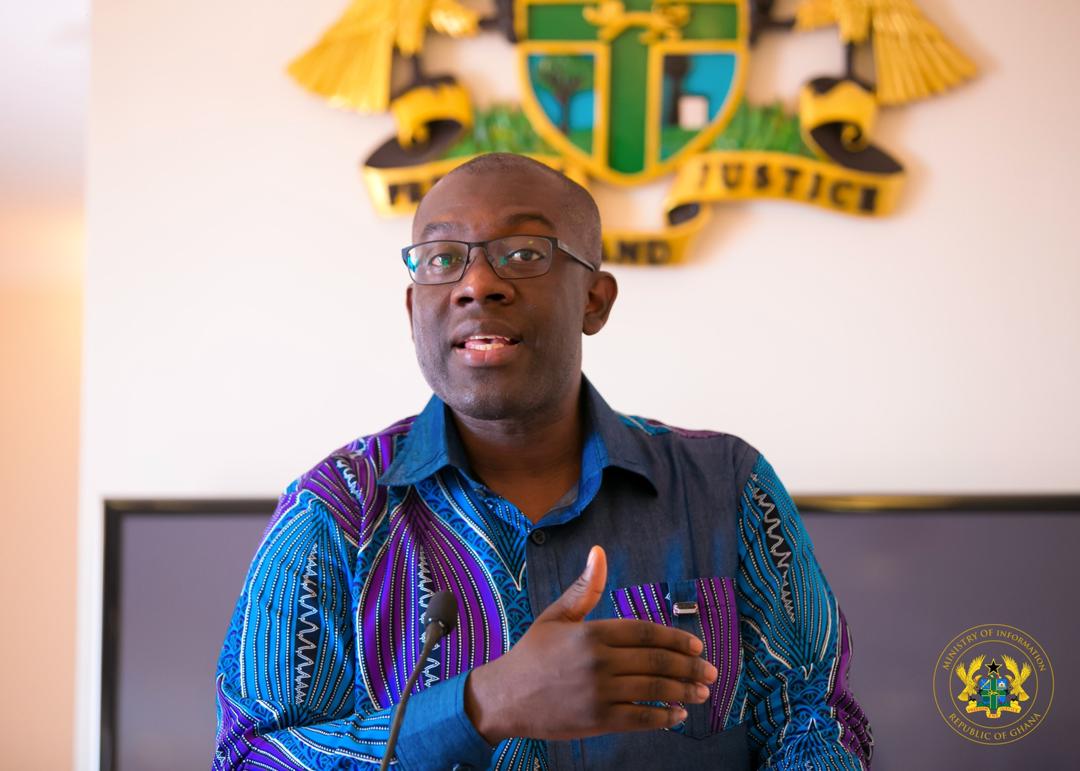 The COVID-19 Health Levy contained in the 2021 Budget Statement and Economic Policy of the government has nothing to do with settling bills accrued from the provision of free water and electricity, the Minister of Information, Mr Kojo Oppong Nkrumah, has said.

“The government has never said anything like that; the COVID-19 levy is not for free water and electricity,” he said.

Speaking at the Minister’s press briefing on COVID-19 in Accra on Sunday [March 21, 2021], Mr Oppong Nkrumah added that there were also reports that the government only spent GH¢1.7 billion on COVID-19, which again the Ministry of Finance had explained was incorrect.

Mr Oppong Nkrumah said for the avoidance of doubt, the budget document had outlined the uses of the COVID-19 levy which had been reiterated in a statement issued by the Finance Ministry, dated March 19, 2021.

The Ministry of Finance's statement which Mr Nkrumah made reference to, sought to correct the misinterpretation put on a comment he made last week in connection with the government's spending on fighting the pandemic.

“The Ministry also noted media reports suggesting that government has announced that the COVID-19 levy is to be utilised in paying for free water and electricity of 2020. Again this is incorrect. The Minister of Information's comment to the effect that COVID-19 expenses include water and electricity ought not to be misconstrued to mean the new taxes of 2021 are direct charge for those services,” the ministry's statement said.

Mr Oppong Nkrumah said the budget outlined some of the health-based COVID-19 interventions embarked upon so far, which clearly stated that the levy would provide the requisite resources to sustain implementation of these measures.

Mr Oppong Nkrumah expressed the gratitude of the government to Parliament for the approval of the 2021 Budget Statement and Economic Policy, emphasising that it would help engineer the recovery from the impact of the COVID-19 pandemic and also accelerate growth and expansion of the economy.

He said the Executive looked forward to working with all stakeholders in some of the suggestions that had already started coming up to ensure that the new revenue streams achieved the intended benefits.

“The first part of the recovery programme seeks to bring the economy back on a path to sustainability over the last four years. This is critical to restore debt sustainability and restore a strong macro foundation to propel the medium term and the future growth agenda that we are looking for,” he posited..

Further explaining the focus of the budget, he said, particularly, it sought to reduce the deficit which escalated from 4.8 per cent in 2019 to 11 per cent in 2020, back on a path to sustainability over the next four years.

“This is critical to restore debt sustainability and a strong macro foundation to propel our medium term and future growth agenda,” he stated.

Mr Oppong Nkrumah said following the approval of the 2021 Budget Statement and Economic Policy, Parliament was expected to pass the Appropriation Bill by March 30.

“Parliament will from this week begin to consider the budget or the estimates of the Ministries, Departments and Agencies on an individual basis, and our expectation is that by the 30th of March, Parliament should receive and pass the Appropriation Bill which is what will give the Ministry responsible for Finance the mandate to spend from 1st April 2021,” he said.

Mr Oppong Nkrumah called on the general public to support the measures outlined in the economic policy.

He also encouraged the media to assist in helping the people to understand the benefits of the post-COVID-19 recovery programme while correcting misrepresentations that may come up in the discussions.

Providing the update on the COVID-19 situation in the country, the Director-General of the Ghana Health Service (GHS), Dr Patrick Kuma-Aboagye, said there had been a gradual improvement in the general situation.

Dr Kuma-Aboagye said cumulative positivity rate was around 9.2 per cent, with about 85,761 recoveries, representing 95.1 per cent.

The total active cases were about 3,196, representing 4.1 per cent, with 725 deaths recorded in the country.

The Director-General said at the Kotoka International Airport (KIA), 198, 969 arrivals were tested, with 1,306 positive cases recorded.

Among the figure, he said, 818 were males while 488 were females, adding that 757 (representing 58 per cent) among them were non-Ghanaians.

On the schools update, he said recorded cases were 1,920, with one mortality recorded.

He said the current active cases also stood at 220 with the North East Region being the only region without active school cases.

Dr Kuma-Aboagye said about 42 million doses of vaccines would be needed to vaccinate the targeted population of 20 million in addition to wastage.

“Ghana needs about 42 million doses of vaccines, that is if we are to vaccinate all the 20 million people targeted by October this year, and these should include the anticipated wastage.

“We so far have a quantity of about 12 million from the COVAX facility for about six million people covering some 20 per cent of the population.

“We also have about 17 million vaccines requested from the African Medicines Platform that we hope to see arrive on schedule,” he indicated.

Dr Kuma-Aboagye indicated that the private sector had also pledged to support the government in bringing in additional vaccines to fight the pandemic.