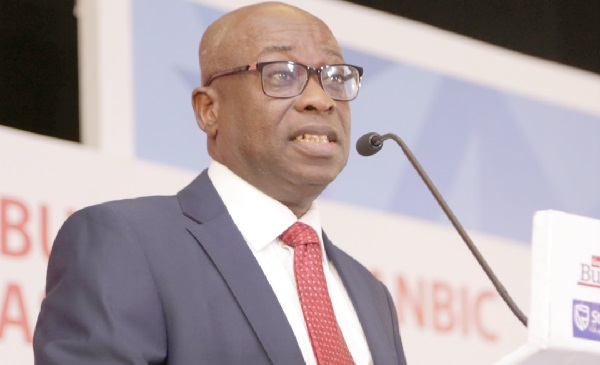 A former President of the Association of Ghana Industries (AGI), Dr Tony Oteng-Gyasi, has observed that the lack of discipline and incessant corruption has made it impossible for the country to use import duties and tariffs as economic tools to curtail cheap imports and stimulate growth in the local industries

is in spite of the fact that temporary but targeted import tariffs have proven to be effective in warding off imports and promoting domestic industrialisation, he said at the GRAPHIC BUSINESS/Stanbic Bank Breakfast Meeting on manufacturing on July 31.

While explaining that he was not advocating protectionism for local firms through import tariffs, Dr Oteng-Gyasi said Ghana, unlike other countries, had adopted “a lazy approach” to import duties, making it ineffective in even raising revenues, talk less of promoting industrialisation.

He mentioned the pervasive evasion of import duties, fake invoicing, misdescription of goods, undervaluation and mislabelling of imported products as some of the strategies used by “some criminal minds” to dodge taxes and subsequently flood the economy with cheap imports, which then lead to the collapse of indigenous factories.

“In Ghana, you will find that we do it in, excuse me to say, a rather lazy way; we put four bands, very easy to calculate and collect.

“In other places, somebody does a detailed work, industry by industry, looking at what really is the difference between somebody producing fabrics and producing cutlery and ensure which import structure will work well,” he said, and cited the American government’s implementation of the Harmonised Codes as a perfect example of how import duties work to protect domestic industries.

“The unfortunate thing in our country is that even when we try to do that, we find out that the lack of discipline and sanctions have resulted in us not being able to collect those minor tariffs legitimately put in place by the government.

“How can the government decide that when you bring in napkins, you have to pay a duty of 10 per cent, yet you can go through the ports in Ghana without paying?” Dr Oteng-Gyasi, who is also the Managing Director of Tropical Cables and Conductors Limited (TCCL), asked.

The Senior Minister, Mr Yaw Osafo-Maafo, who was a co-panellist, said the reference to indiscipline was “a nice euphemism for corruption,” which the government had detected and was now putting in measures to eliminate it.

He cited the collapse of fast-moving consumer goods (FMCG) manufacturers and the decline in the fortunes of a local fruit processor as evidence of how cheap imports were killing domestic factories.

As a result, he said, it was sad that when people asked for steps to be taken to help rid the system of these criminal activities, “we get bogged down by cargo tracking note (CTN) and we have trade associations and people fighting over it.

“Why should it be so? By this, we are doing things to protect businesses whose very existence is based on breaking the law; I mean criminal activity is the business model that some people have,” he said.

That, he stated was the genesis of de-industrialisation, which he explained as the migration of manufacturers from the country to neighbouring countries due to cheap imports and rising cost of production.

The result, he added, was its attendant loss of jobs, revenue and growing imports to the benefit of other economies to the detriment of Ghana’s.

“All of these is because of indiscipline. So, when we talk of industrialising, you cannot industrialise in an environment,” he said, noting that the differences between the Asian Tigers and Ghana in the area of industrialisation discipline.

Dr Oteng-Gyasi also berated the country’s inability to integrate businesses in the raw material chain to the value addition, citing the importation of fruits and soya bean by domestic manufacturers as an example.

“What is the national strategy to promote fruit processing and make sure that enough fruits are grown? Who is identifying the fruit growers?” he asked.

He said the lack of a national strategy on manufacturing and failure to integrate had led to the collapse of factories that were assembling Akasanoma televisions, electric bulbs, fans and irons and the Bonsa Tyre Company.

“The question is why has this happened? It happened because we have not realised the dynamics of manufacturing,” he said.