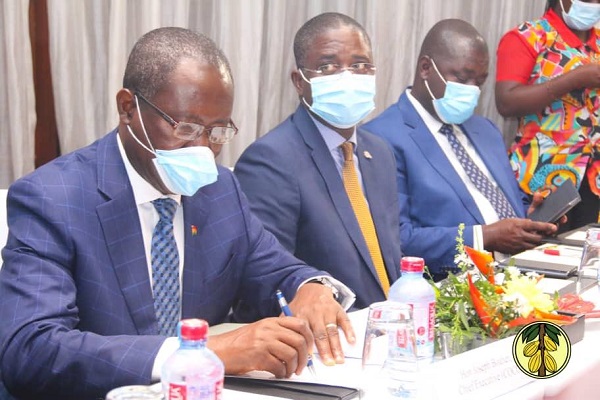 Mr Joseph Boahen Aidoo (left) signing the documents on the $1.3 billion cocoa loan. With him are other management members of COCOBOD

A consortium of local and international banks has signed an agreement to lend $1.3 billion to the Ghana Cocoa Board (COCOBOD) to be used to purchase cocoa beans from farmers for the 2020/21 crop season.

The bids to offer the loan were oversubscribed by $400 million by the 28 banks that are syndicating the funds for onward transfer to the cocoa sector regulator.

The facility attracts an interest of 1.74 per cent, in addition to the London Interbank Overnight Rate (LIBOR), a global reference for setting interest rates on offshore loans.

The loan is expected to be used to purchase about 900,000 tonnes of cocoa beans in the next cocoa season, which opens tomorrow.

As a commodity-backed transaction, COCOBOD is expected to use a portion of the season’s produce to repay the loan.

The signing was witnessed by the Board Chairman of COCOBOD, Mr Hackman Owusu-Agyemang; the Chairman of the Parliamentary Select Committee on Finance, Dr Mark Assibey-Yeboah, and some management members of COCOBOD.

The other institutions are the Industrial and Commercial Bank of China Limited (London branch), the MUFG Bank Limited, Natixis Bank, Societe Generale and the Standard Chartered Bank.

In a statement after the signing, Mr Aidoo thanked the participating institutions for the faith reposed in the board.

He gave an assurance that the loan would be used solely for the purpose for which it had been contracted.

“I also want to assure our supportive financial institutions that, as we have done over the years, we will repay the loan on schedule,” he said.

Mr Aidoo said the board was able to secure the loan at a competitive rate, in spite of the shock that the COVID-19 pandemic had brought on the global economy.

“We have also returned this trust by ensuring that we have never defaulted in the repayment of loans since 1992 when the first syndication was signed,” he said.

He said the board had maintained an enviable record of always finishing up the repayment of the loan ahead of the signing of a new facility.

Mr Aidoo noted that in their effort to ensure improved incomes and livelihood for cocoa farmers, Ghana and Cote d’Ivoire introduced the living income differential (LID), a pricing mechanism that guarantees an additional $400 per tonne of cocoa beans sold by the two countries.

“The LID goes directly to the farmers and it is in this regard that President Nana Addo Dankwa Akufo-Addo announced a 28 per cent increase in farm-gate cocoa price for the 2020/2021 crop season, which begins on October 1.

The Minister of Food and Agriculture, Dr Owusu Afriyie Akoto, commended the board and the management of COCOBOD for being able to raise the $1.3 billion at such a difficult time.

He said the government was committed to rolling out measures to ensure that the cocoa target for the 2020/21 crop season was achieved.

He said the measures would also look at the future sustainability of the sector.

Mr Owusu-Agyemang, for his part, said COCOBOD, through the syndication, had been able to consistently pay cocoa farmers on time.

“We do not have to wait to sell the cocoa before we pay farmers. Once it is delivered, it is paid for, and this has been possible through the syndicated loan,” he said.

He insisted that eventually, COCOBOD would be able to do the syndication locally.

“I am hoping that one day we will be able to raise all the money from our local banks here,” he said.