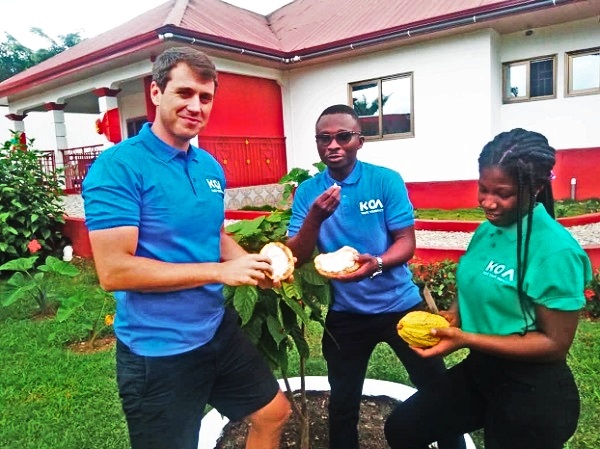 A cocoa fruit juice factory has been inaugurated at Akrofuom in the Assin South District in the Central Region.

KoA Cocoa Ghana Limited is intended to add value to cocoa and ram up cocoa consumption on both the local and the international markets.

It is also expected to afford consumers the needed nutritional benefits from the brown gold.

The factory — which has the capacity to produce between 800 and 1,000 litres of cocoa fruit juice per day — is the brainchild of a solar energy expert, Mr Michael Acquah, who developed the cocoa fruit juice concept with two German colleagues following their expansive work in rural areas to scale up the use of solar energy around the country.

It currently employs 35 workers, most of them natives of the Akrofuom community.

It was established by Mr Acquah, with support from the Swiss Embassy in Accra.

At the inauguration ceremony, Mr Acquah said the factory would open bigger opportunities for cocoa production to improve the lot of cocoa farmers in the country.

The Central Regional Minister, Mr Kwamena Duncan, described the factory as a product of the vision of the government of President Nana Addo Dankwa Akufo-Addo.

He said the government would support the factory to create employment for the teeming youth to improve their living standards.

The Omanhene of the Owirenkyi Traditional Area, Ehunabobrim Prah Agyensaim, said Ghana could not develop without adding value to its numerous natural resources.

He entreated the youth to go into entrepreneurship to create jobs for themselves and others, saying snails rearing, for instance, had a lot of employment potential if pursued as a complete economic enterprise.

The President of the Ghana Technology University College, Prof. Emmanuel Ohene Afoakwa, said Ghana’s cocoa products had recently attracted the attention of many countries because of their quality and nutritional and medicinal properties.

He said over the years, studies had shown that the consumption of Ghana’s cocoa could aid optimal health and development and reduce the risk of conditions such as cardiovascular diseases (CVDs), cancer and other age-related diseases.

The Deputy Head of Mission of the Swiss Embassy in Accra, Mr Mathias Feldmann, praised the relationship between Ghana and Switzerland, particularly in the area of cocoa.

“Switzerland and Ghana share a long and common relationship.

Indeed, 60 per cent of cocoa beans that are exported to Switzerland are sourced from Ghana. We can rightfully say that without Ghana’s cocoa, there will be no Swiss chocolate,” he said.