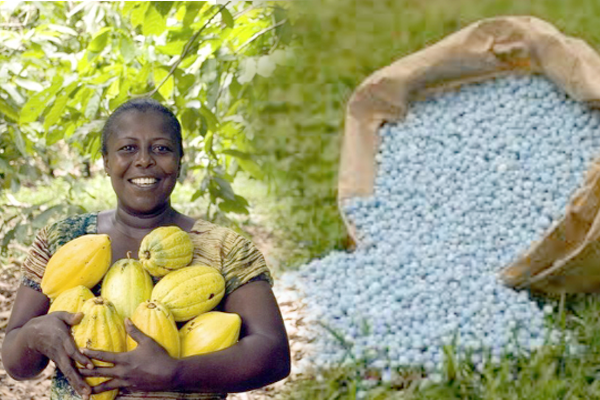 Some cocoa farmers in the Obuasi Municipality in the Ashanti Region have alleged that their leaders hoard farm inputs such as fertiliser and pesticides supplied by the government.

They accused the leaders of using their position to keep and later sell those inputs at exorbitant / non-subsidised rates to farmers.

“There have been many occasions where we have been denied our rights to have access to subsidised farm inputs from the government. They refuse to let us buy even when we are willing to do so,” one farmer who pleaded anonymity complained.

Another farmer explained that there had been instances where farmers were made to register to enable them to benefit from any support from the government, but it never happened.

“When the support comes, the leaders share among themselves because they know very well that no one can report them,” the farmer alleged.

A visit to some selected cocoa-farming communities in the municipality revealed that in some of the farming communities, as soon as the chemicals reached the leaders, they distributed a few of the inputs, hoarded the rest and told their co-farmers that the inputs were inadequate for even distribution.

“Sometimes some of our leaders pretend not to have received any inputs. They resort to sharing the chemicals at midnight,” a farmer revealed.

Due to the above reasons, some of the farmers said they often used their own monies to buy the inputs from the open market for their cocoa farms, a situation that has often resulted in lower yields because they lacked the funds to buy adequate inputs.
Others said they were propelled to go for loans with high interest rates which subsequently robbed them of their little profit.

Some of the farmers wondered whose duty it was to monitor the supply and distribution of the subsidised inputs in an effective manner.

They urged the government to put in place a policy that would ensure the direct distribution of subsidised inputs to cocoa farmers.

Local offices of the Ghana COCOBOD, they said, could
be involved in the distribution of the chemicals to ensure effective distribution.

Also, there could be some government appointees who would serve as supervisors to monitor the distribution of the chemicals in the various villages to ensure fairness among Ghanaian farmers. — GB