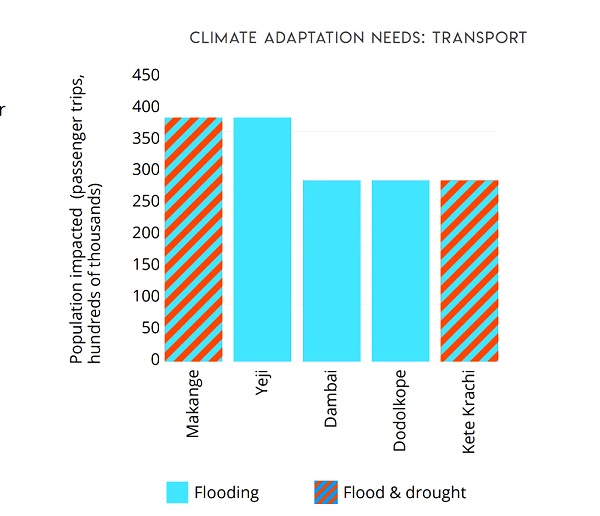 FOR long, governments have ignored the risk of the devastating impact of climate change in the country and have not pragmatically put in place measures to mitigate it.

But soon, the effect will bite harder than it has started with inland cargo transport threatened.

For instance, by 2050, over four million passengers and 500,000 tonnes of cargo every year within the country risk getting access to inland ports and associated ferry services.

This is due to climate change as Ghana is expected to experience more acute climate hazards such as flooding and intense droughts in the next 28 years.

Inland ports with the greatest exposure are those at Makange, Yeji, Dambai, Dodolkope, and Kete Krachi with a combined 1.8 million annual passenger trips, a new report by the Global Centre for Adaptation (GCA) has established.

Titled: “Ghana: Roadmap for Resilient Infrastructure in a Changing Climate,” the report is the country’s first national assessment to explore how best to enhance the resilience of its national infrastructure.

The report, which was launched at a ministerial dialogue in Accra in the last week of March this year, maintained that inland water transport systems provided passenger and cargo transportation services to local communities.

The main means of inland water transport is the Volta Lake, which has a total surface area of 8,502 kilometres and stretches 450 kilometres from north to south.

Communities within the Volta basin are engaged mainly in fishing and farming.

Given that many of these communities are isolated due to inadequate road linkages, the lake serves as a primary means of transportation for these communities, including transferring their farm produce.

Resilience of the Volta Lake is, therefore, critical to safeguard the socio-economic development of the area.

Both floods and reduced river runoff can significantly impact the transportation services in the Volta Lake.

Flooding can expose all major inland ports in the lake as well as the nine associated ferry connections, significantly hampering the transportation of up to 500,000 tonnes of cargo and over four million passengers each year due to overtopped ports and strong currents that make transportation more difficult.

In addition to flooding, reduced river runoff, especially in combination with periodic drops in the level of the lake, exposes navigation hazards like tree stumps and sand banks that greatly reduce the ability to navigate along the lake.

To continue to ensure socioeconomic development in these regions, it is thus imperative to adapt inland water transport systems to hazards of flooding, low water levels, and reduced river runoff.

The Chief Executive Officer (CEO) of Global Centre on Adaptation, Professor Patrick Verkooijen, said the findings from the report were quite startling and needed the attention of all stakeholders to avert the looming climate hazards.

He stated that this has the potential to threaten the socio-economic development gains which made Ghana a middle-income country.

“I do not need to remind you that Ghana will become hotter, wetter, and drier. Given how we know the climate crisis is evolving, these are very alarming statistics.

“But this is not the full story. For us at the Global Centre on Adaptation, the real story on climate adaptation in Africa is a story of resilience, of responsibility, of solidarity, of opportunities for a safer, greener, more prosperous continent. It is this story that is captured in the roadmap we are launching,” he said.

Sharing other findings, Prof. Verkooijen observed that half of all of Ghana’s energy generation capacity was exposed to flooding.

He stated that by 2050, climate risk could lead to $3.9 billion in damages to the transport sector; three-fold the investment of $1.3 billion made in the sector in 2019.

“About 80 per cent of the population in some districts in Ghana risk being cut off from health care and women will bear the brunt,” he added.

The Minister of Environment, Science, Technology and Innovation, Dr Kwaku Afiyie, said nearly half of humanity was living in the danger zone and that climate change was forcing the world’s most vulnerable on a frog march to destruction.

He said it was even more worrying to note that the increasing number of extreme weather events continue to disproportionately impact countries vulnerable to climate change, particularly in Africa, including Ghana.

“For example, In Ghana, it is now common to see roads, bridges, dams and school buildings wash away after a downpour.

“As we embark on coronavirus (COVID-19) recovery, we must transform the challenges of climate change into a historic opportunity by ensuring that recovery efforts are aligned with the 2030 Agenda for Sustainable Development and the goals of the Paris Agreement to build forward better.

“Achieving this alignment requires us to overcome our traditional silo approaches in favour of cross-sectoral decision making and innovative solutions that unlock synergies across government portfolios, sectors of the economy, and the Sustainable Development Goals (SSAs),” he said.

She said this included creating awareness and preparing for the dangerous threat posed by climate change.

“It is against this background that the Government of Ghana (GoG), in partnership with GCA and other partners, championed the report to highlight climate adaptation to protect and safeguard the environment,” she added.