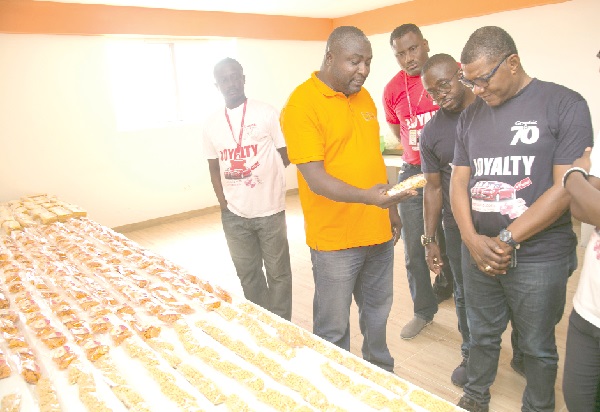 A sweet potato producing and processing company, Casa De Ropa, has shut its doors to the export of the raw produce, in spite of rising demand for consignments to Europe, the Americas and China.

The company said although it had the potential to meet the demands of prospective businesses, exporting the sweet potato in its raw form would derail its ambition of adding value to Ghana’s produce.

It said exporting would also curtail the development and expansion of the company’s processing business, which hinged on using the sweet potato to create 12 different products and enhance the potential multi-million-dollar industries around the commodity in the country.

Casa De Ropa, a One-district, One-factory (1D1F) business, has been in operation since 2015.

The company secured a GH¢14.4-million loan under the 1D1F policy from the Ghana Export-Import (EXIM) Bank, which it is using to boost operations.

The Chief Executive Officer (CEO) of the company, Mr Ebenezer Obeng-Baffoe, said this when a group of brand editors and management staff of the Graphic Communications Group Limited (GCGL) toured the farmhouse and factory premises of Casa De Ropa at Gomoa Bewadze in the Central Region last Thursday.

"We have the potential for the export business, but as a business, we are not interested in exporting our raw materials,” he told the Daily Graphic.

“This is the development stage of sweet potato; we need thousands of tonnes, probably about 10,000 tonnes of sweet potato is what we alone would need. If you start exporting the raw materials, it means the development stage will be curtailed because once you make some good money from the raw materials, then there is no need to build a factory, and that is not our intention. The intention is to develop this into a first-class facility,” Mr Obeng-Baffoe said in reference to the company’s processing plant.

He said while the increased production was meant to get enough locally produced sweet potatoes to feed its processing plants, the setting up of outlets and restaurants nationwide was meant to feed Ghanaians with a healthy balance diet using indigenous produce.

The Casa de Ropa CEO said the company was aiming at avoiding the mistake that the country had been saddled with in the cocoa sector.

He said it was sad that although Ghana and its western neighbour, Cote d’Ivoire, produced about 60 per cent of the world’s cocoa, the two countries earned less than one per cent of the income that the commodity generated due to their inability to add value to their raw produce.

He intimated that Ghana risked running into the same dilemma should sweet potato producers such as Casa de Ropa choose exports over indigenous processing.

“Beyond the jobs that the processing of the produce will create for the youth, processed products will become quality foods for children to help make them healthy,” he added.

He said in the long term, the company would aim to use sweet potato as a raw material to produce medical banners, mosquito coils, organic fertiliser, flour, biscuits, noddles, baby foods, among others.

“Ghana is importing about 400,000 tonnes of wheat flour every year. Why can’t we substitute that with sweet potato flour?” he asked.

“So the reason for not exporting today is to deny ourselves some level of income and use ourselves as a sacrificial lamb for the nation,” the CEO of Casa de Ropa added.

The visit was a follow-up to one by a two-man delegation from the company, comprising the CEO, Mr Obeng-Baffoe, and the Executive Director, Mr Anthony Dawson-Amoah, to the GCGL Head Office in August this year.

The two, who are co-founders of the company, held discussions with the Managing Director of the GCGL, Mr Ato Afful, and other management staff on ways the two companies could collaborate.