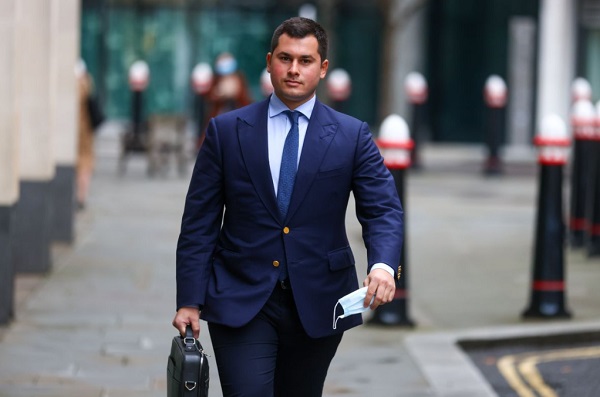 Temur Akhmedov arrives at the Rolls Building in London, on Dec. 9.
30.5k Shares

The son at the centre of a $600 million divorce case in London said he felt he let his father down when he lost more than $50 million while day trading as a college student.

Temur Akhmedov is testifying to counter accusations from his mother, who says he worked with his father, Farkhad Akhmedov, to hide assets after their divorce. Temur says he isn’t hiding the money, but instead lost much of it with bad trades.

His father, a one-time fur trader who went on to amass a fortune running a gas producer in Siberia, was very angry when he found out about the trading loss, he said.

“I suspected he was thinking that he would never have made the same mistakes that I had,” the 27-year-old said in a legal filing Wednesday. “To him, it was a shocking sum to have lost, especially so quickly.”

Temur said he’d had some initial success and made a profit trading stocks, only to hit a losing streak while studying at the London School of Economics. When he tried to make back the money, “convinced this loss was just bad luck,” he increased his risk exposure and lost everything, he explained in court.

What happened to Temur’s trading is key to the latest legal fight stemming from Britain’s largest divorce case. His mother, Tatiana, has said that Temur helped her former husband to move assets, including by trading large sums. But Temur, her eldest son, has insisted that she knew all about his losses.

She is seeking to recover a 450 million-pound ($600 million) court-approved divorce payout. Farkhad Akhmedov has refused to pay, leaving Tatiana to pursue legal cases in at least six countries.

Farkhad made much of his wealth from the $1.4 billion sale of his stake in a Russian gas producer in November 2012. His original fur trading business collapsed with the fall of the Soviet Union.

‘Strained’ Relationship
Temur said his father made his own decisions. He said his mother’s choice to draw him into the litigation has been “tremendously upsetting and in many ways quite frightening.”

Tatiana said that her relationship with her eldest son “is now very strained.” She said she felt she had no choice but to sue him.

The fight has led to so-far unsuccessful legal attempts to seize a 115-meter (377-foot) superyacht once owned by fellow Russian billionaire Roman Abramovich that is currently holed up in Dubai, and a collection of modern art worth more than $140 million in a secure storage facility in Liechtenstein known as the “Treasure House.”

Temur said that if he’d made any trading profits they would have been held in Britain and available to his mother.

“And though those sums are now ‘beyond reach,’ it is only because I invested them badly and the sums were lost,” he said.