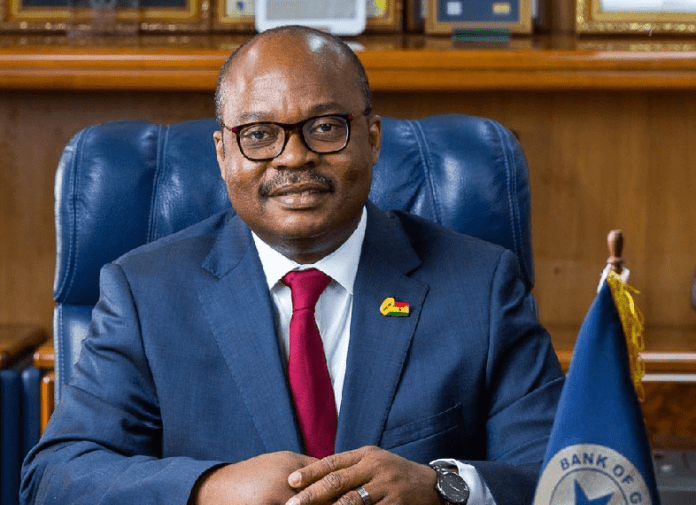 Dr Ernest Addison, the Governor of the Bank of Ghana Follow @Graphicgh

The Monetary Policy Committee of the Bank of Ghana has raised the policy rate by 200 basis points (2 per cent) to 19 per cent from 17 per cent to stem inflation.

Announcing the rate at a press conference on Monday, the Governor of the Bank of Ghana, Dr Ernest Addison, said the Committee needed to deal decisively with inflationary pressures to reanchor expectations and help foster macroeconomic stability.

Inflation has climbed rapidly in recent months to 23.6 per cent in April and the bank’s latest forecast shows a continued elevated inflation profile in the near term with a prolonged horizon for inflation to return to the target band of eight minus or plus two per cent.

“The risks to the inflation outlook are on the upside, and emanate from availability of inputs for food production, imported inflation, continued upward adjustments in ex-pump petroleum prices and transportation costs, possible increases in utility tariffs, and potential wage pressures,” he added.

“The second-round effects of these administered price adjustments would further amplify inflation pressures in the outlook. These considerations show that with the strong rebound in growth and the closing of the negative output gap, the balance of risk is clearly on inflation,” he added.

Dr Addison said the growth prospects in the domestic economy remained positive and the Bank’s high frequency indicators point to continued and increased momentum in economic activities with private sector credit showing some improvement in real terms, despite the increased price pressures.

He said the banking sector remained robust, with sustained growth in total assets, investments and deposits.

However, business and consumer confidence have dipped, reflecting the sharp depreciation of the currency and the general high inflationary environment, which has resulted in higher input costs for businesses.

On fiscal policy implementation, the Governor said the Committee observed that execution of the budget for the first quarter was broadly in line with targets although there was a minor deviation in the deficit target, stemming largely from low revenue receipts.

Dr Addison said despite the improvement in the trade balance due to favourable commodity prices, the external sector had weakened somewhat due to developments in the capital and financial account.

The capital and financial account recorded some significant outflows from net portfolio reversals and net private capital outflows, which resulted in an overall balance of payments deficit of US$934.46 million for the first quarter of 2022, compared with a deficit of US$429.93 million, same time last year.

“The domestic economy does not fully benefit from higher oil and gold prices due to retention agreements in these sectors. The increased repatriation from dividend payments and profits, as well as the net portfolio reversals, have resulted in a widened balance of payments outturn and loss of reserves,” he said.