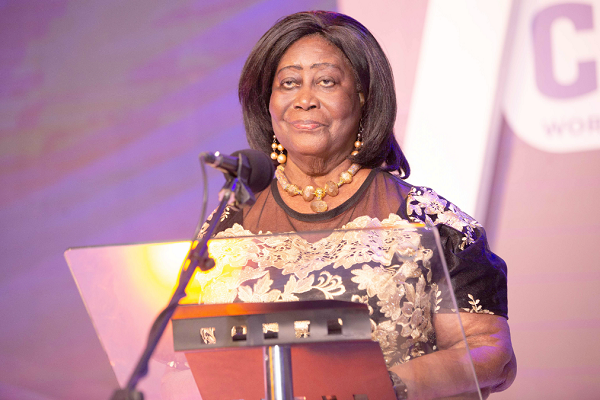 Dr Mary Chinery-Hesse, Chancellor of the University of Ghana

The Chancellor of the University Of Ghana, Dr Mary Chinery-Hesse, has stated that the African Continental Free Trade Area (AfCFTA) provides greater hope for industrialisation in Ghana and other African countries.

She said AfCFTA was a bold step to establish a single market that might be the world’s largest trade area and its actualisation would allow free movement of business travellers and investment, and create a continental customs union.

“At long last, we are on the cusp of history with the creation of the African Continental Free Trade Area (AfCFTA).

What was rated as mere rhetoric of African Leaders when they meet is now a reality, with this bold step to establish a single market, that might well be the World’s Largest Trade Area,” she stated.

It was organised by the Chartered Institute of Marketing Ghana (CIMG), on the theme: “Repositioning Ghana to Leverage AfCFTA for Economic Development”.

Some of the most creative brands and marketing communication messages were also awarded.

Dr Chinery-Hesse said the expectation that Africa would benefit from all the advantages of the trade bloc of nearly a billion consumers to improve the quality of life of Africans was widespread.

“Advantages such as lower prices and various products, access to cheaper and more abundant capital etc.

We all expect AfCFTA to be a free trade area which will be a powerful driver of economic growth and transformation which will improve the quality of life of Africans,” she stressed.

The AfCFTA also provides opportunity for the country to address directly some of the economic issues, “especially as relates to the Sword of Damocles hanging over our heads, because of the army of angry youth who are unemployed.”

She expressed satisfaction at Ghana’s tremendous efforts aimed at revitalising the economy, in spite of the challenges posed by the COVID-19 pandemic.

Dr Chinery-Hesse observed that a good number of sectors of the economy had totally recovered, with others showing signs of recovery, though that was gradual.

“This is evidenced by the upward trajectory of the performance of some Ghanaian businesses, which has had such positive effect on the economy, in spite of the fact that the ravaging effects of the pandemic still lingers on.

“We have to salute the resilience of Ghanaian businesses and the commitment and ingenuity with which they have managed their businesses in the face of the many difficulties,” Dr Chinery-Hesse stated.

The first woman Deputy Director-General of the International Labour Organisation (ILO) also called for a new training systems to be established that would enable young people to equip themselves with the required skills.

“Let us listen to the captains of industry who strongly advise drastic adjustments to the content of the curriculum of our education system, right to the tertiary level, so it can respond more relevantly to the demands of the world of work.

“Policy makers must listen to those at the fireside who can give more pointed advice as to approaches which would lead to the creation of new value chains and business areas which can help create jobs,” the international civil servant and Chancellor of the University of Ghana said.

Dr Chinery-Hesse expressed the belief that a robust manufacturing and industrial sector could provide the jobs which would improve household incomes, boost domestic demand and stabilise economies against external shocks.

She equally called on the players in industry to make it a priority to develop and implement smarter local strategies to seize the increasing opportunities in manufacturing and industrialisation across a variety of sectors.

“Like other free trade areas created elsewhere, the experience is that among the countries making up the group, there will be winners and losers.

“We expect that the same thing will happen within the context of AfCFTA,” Dr Chinery-Hesse stated.

Countries with better comparative advantage would be those which had strong manufacturing capacity, cheaper costs of doing business, high productivity, good infrastructure and easy access to loans and financing, she said, stressing that, “we need to keep this in mind.”

She, therefore, entreated captains of industry to be relentless in their marketing efforts, and constantly tell their stories.

“For so long, Ghanaians have been perceived to be modest people.

We exhort you to do your utmost best to capture a larger share of the expanded market, so that Ghana can be positioned as an important global trading partner,” she said.

Dr Chinery-Hesse urged the marketers and industrial sector players not to forget the most important component in the equation – the customer.

She said managing the customer well was extremely significant and a contributory factor to customer loyalty.

“It is necessary to prioritise customer needs by understanding the different cultures for proper segmentation, targeting and positioning,” the guest speaker said.

In so doing, she advised the marketing community to also get on the bandwagon of digitalisation.

She congratulated the CIMG on her 40th anniversary and urged members of the institute not to rest on their oars as “we expect even more from you, and I am confident that you will deliver.”