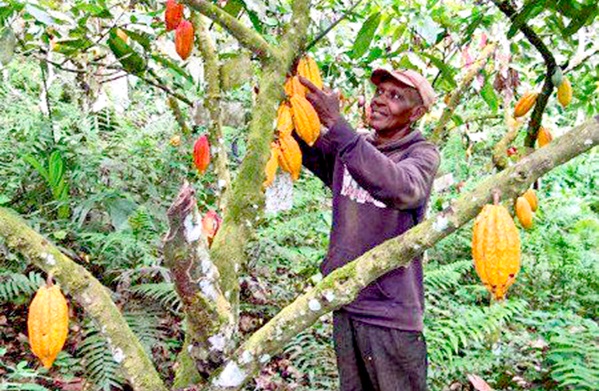 The Ghana Cocoa Board (COCOBOD), has said it has enough chemical fertiliser for cocoa production although the raging Ukraine-Russia crisis presents a real threat to continuous supplies.

It has, therefore, urged cocoa farmers and the general public to remain calm while it explored alternatives to the potential cut or shortage in imported stocks owing to the fighting.

The Senior Public Affairs Manager of COCOBOD, Mr Fiifi Boafo, told the Graphic Business, last Tuesday that supplies available to the board were sufficient but the continuous fighting was blurring the chances of replenishing the stock on time and in the right quantities without significantly affecting prices.

Mr Boafo was speaking to the paper on how the board was insulating the cocoa sector from the Ukraine-Russia crisis.

He said beyond fertiliser, sales into the Russian and Ukrainian markets could also be hampered should the fighting persist.

Russia is the world’s leading supplier of fertiliser ingredients such as nitrogen, phosphorous and potassium.

The imposition of sanctions on the country by the West and the disruption of global supplies due to the crises mean that Russian exports would be hampered, thereby threatening the amount of fertiliser that can be produced and exported to countries such as Ghana.

Mr Boafo of the COCOBOD said the board, which regulated the sector, was also responding in similar fashion.

He said it had already started exploring alternatives to imported chemical fertiliser, starting with the poultry droppings, which he said had proven to be a potent source of nutrients for crops and trees.

“There is no challenge at the moment as we have fertiliser supplies but of course, we cannot fold our arms and sit. We still do not know the extent of the crisis; things are fluid but as you go on, you have to prepare.”

“Going for the poultry manure is within our control and that is why we are urging the farmers to consider it,” Mr Boafo said.

Ghana, which is the world’s second biggest grower of cocoa, produced 1.047 million tonnes last year and now aims to produce about 850,000 tonnes this season.

Last Monday, the Minister of Food and Agriculture, Dr Owusu Afriyie Akoto, said it was advisable for smallholder farmers to start using organic fertilisers in the wake of a looming global shortage.

Dr Akoto said at the inauguration of a seven-member board for the National Fertiliser Council that a switch to organic fertiliser could help insulate the country from price hikes.

“We at the ministry have a strategy to at least alleviate the full impact of what is happening, which is to encourage farmers to apply organic fertiliser. We know that, for instance, poultry manure is being exported from this country to neighbouring countries, which are using it on their farms.

“We should, therefore, be able to use these organic fertilisers locally to continue promoting our increase in production in the country,” the minister said.

Meanwhile, the minister said that fertiliser application was picking up tremendously across the country.

He, however, said there was the need for the country to do more to achieve the requirement of an average of 50kg per hectare set by the Economic Community of West Africa States (ECOWAS).

“So, although we have made a lot of efforts in bringing up the average application of fertiliser, we are still very far away from either the West African target of 50kg per hectare or the global target of 130kg per hectare. We are only half of that,” he said.

“Unfortunately, there is a setback in terms of what is happening on the world market, he said, citing the impact of the crises on the fertiliser market.

“For instance, prices skyrocketed from $350 per metric tonne of urea in Ghana, which went as high as $1,200 and started coming down but with the Ukraine crisis, I do not know where it is now.

“So, we have a problem in terms of availability and price,” he added.