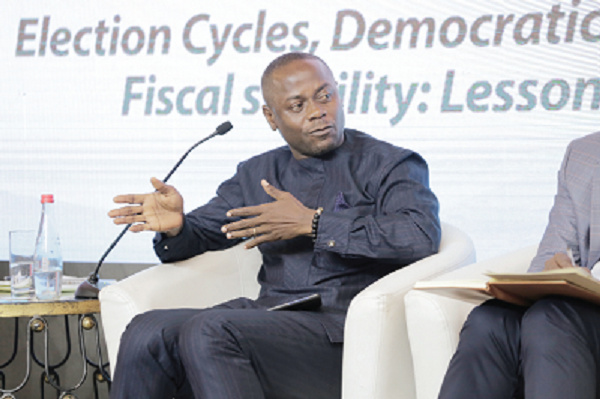 An Associate Professor of the Department of Economics at the University of Ghana (UG), Professor Eric Osei-Assibey, has called on Ghanaians to embrace the proposed levy (E-Levy) imposed on mobile money and other electronic transactions announced in the 2022 Budget.

While admitting that the levy had the tendency to derail the country’s digitalisation and financial inclusion agenda, he said it was a necessity, considering the government’s present fiscal situation.

He said the current situation where three items in the budget, including interest payments, compensation and statutory payment consume about 75 per cent of the inflow, the government needed to raise more revenue to be able to keep its operations running.

At the National Business Summit 2021 organised by the Chartered Institute of Supply Chain Management-Ghana (CISCM) in Accra on December 9, Prof. Osei-Assibey said the revenue to be collected from the proposed E-Levy would help the economy recover faster.

The lecture was on the theme: "The Effective Ways of implementing the 2022 National Budget to Gain Value in the Midst of the Global Supply Chain Crisis”.

Prof. Osei-Assibey observed that should the government fail to raise beeded revenue to address its current challenges, the expected economic growth would not come, jobs could not be created, and infrastructure development would also be a mirage.

For this reason, he said the benefits of the government being able to raise revenue, compared to the cost that the E-Levy might bring, outweighed the cost.

“Adoption of digitalisation and digital means of doing everything is not easy for people, and so anything that will discourage them means they would find alternative means of doing it but we also have to look at it from the current fiscal situation of the government.

“The current fiscal situation of the government is nothing to write home about because we have debt to Gross Domestic Product (GDP) hitting almost 80 per cent, huge risk to fiscal sustainability and macroeconomic stability but if the government is unable to finance these debts and get money to invest in infrastructure, among others, it would work against the economy,” he said.

Prof. Osei-Assibey urged the government to consider reducing the levy from the 1.75 per cent to 1.0 per cent in order not to overburden the public and lead to a situation where they were forced to resort to an alternative means.

“Although, I support the government with the imposition of the levy, it should consider reducing the level from 1.75 per cent to about one per cent to be able to reduce the burden on the people,” he said.

The Vice-President of CISCM, Mr J. Awuku-Sao, said since the COVID-19 pandemic, the global supply chain had been disrupted.

He said large economies such as the United States (US) and the United Kingdom (UK) had been very much affected.

“In Ghana, the situation is not different. The pandemic came with what is generally referred to as “vaccine nationalism.

“Developed countries which were producers of vaccines were not ready to share their vaccines. They were keeping them for their citizens. Africa became an orphan,” he said.

He said what happened shows that African countries needed to put their destiny in their own hands and produce for its own people rather than depending on others.