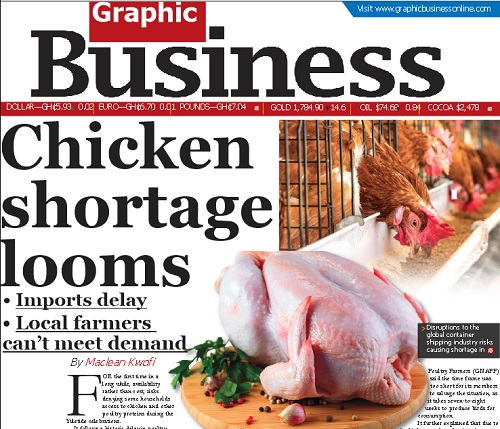 FOR the first time in a long run, availability rather than cost, risks denying some households access to chicken and other poultry proteins during the Yuletide celebrations.

It follows a historic delay in poultry imports into the country from key markets such as the United States of America (USA), Brazil and the European Union (EU), as a result of disruptions to the global container shipping industry.

A market intelligence report by the Chamber of Agribusiness Ghana (CAG) has established that the situation had pushed orders meant to meet Christmas demands into the second week of January and raising concerns over a looming shortage in poultry products during the Christmas and New Year festivities.

The chamber said the development had huge implications on the price of poultry, a key protein source for the country, especially during the Yuletide.

When the Graphic Business checked up with the local poultry industry, farmers said they were aware of the looming shortage but lacked the capacity to fill in the gap.

They mentioned the short time frame and the high cost of operation, particularly feed, as the bottlenecks that would make it impossible for them to benefit from the challenge.

The Ghana National Association of Poultry Farmers (GNAPF) said the time frame was too short for its members to salvage the situation, as it takes seven-to-eight weeks to produce birds for consumption.

It further explained that due to the high cost of production, its members would not even be able to meet the 40 per cent demand for locally produced birds during the festivities, talkless of filling in any void to be occasioned by disruptions to imports.

The Chief Executive Officer (CEO) of the CAG, Mr Anthony Morrison, in an interview with the Graphic Business in Accra on December 11, observed that the assessment of the chamber showed that with regard to the huge tonnes of containers delayed on the international sea, Ghanaians were likely to see a price hike in frozen chicken and other imported goods during this Christmas.

“With this development, we should be seeing a price increase in imported frozen chicken between 25 per cent and 30 per cent going into Christmas.”

“We may not get those goods in by the time of the yuletide and the earliest they may arrive would be the second week of January 2022,” he said.

Mr Morrison indicated that the chamber expects local poultry farmers to be able to take advantage of the opportunity that will be created for the demand for chicken during the period.

“We expect that from February to April next year, we should have excess imported frozen chicken in the market and this will add up to the woes of the local farmers in 2022.

“Already imported poultry products in the market are about 60 per cent cheaper than locally produced chicken and therefore, should the delayed imports arrive in a month, there is likely to be excess poultry, a phenomenon which will aggravate the already dire position of local farmers.

He urged the government to take the needed steps to protect domestic poultry production from foreign competition, if only the country sought to industrialise.

The Vice-President of the GNAPF, Mr Napoleon Agyemang Oduro, stated that the local poultry farmers were not in a good position to meet demand this Christmas.

“Granted that import has been delayed and it takes seven to eight weeks to produce birds for the market while Christmas is about 12 days away, it will be difficult to adjust,” he said.

He said the farmers have not been able to produce enough birds for the market this Christmas like they used to do in the past due to high operational cost.

“I can even assure you that we are currently in business not because we want profit but to sustain the market because there are still some Ghanaians who want to kill the birds by themselves.”

“In 2021 alone, cost of production for broilers has increased by over 100 per cent and that is a disadvantage for producers to invest their capital and make losses at the end,” he said.

He said due to the high cost of production, local birds would be priced between GH¢70 and GH¢100 at the market during the yuletide.

He appealed to the government to introduce a soft loan scheme for poultry farmers to access patient funds, scale up production and create jobs to support the economy.

Several attempts to get some of the importers to speak on the issue officially proved futile.

Those who agreed to speak also pleaded anonymity but confirmed that most of the orders for Christmas have been delayed, signaling what is expected in the coming days and weeks.

That notwithstanding, they said there was stock available to serve the market.

Poultry imports to Ghana keep increasing due to increasing demand and the decline in domestic commercial poultry meat production.

Ghana poultry imports are supplied mainly from the United States, Brazil and the EU.

Supplies from the United States capture over 40 per cent of market share, while European countries and Brazil have 25 per cent each of the market share.

Consumption patterns of households in the country are heavily weighted towards imported frozen poultry products.

The reasons for this trend are that they are cheaper than locally produced poultry and they are already pre-cut: leg quarters and wings, and processed whole chicken and gizzards.