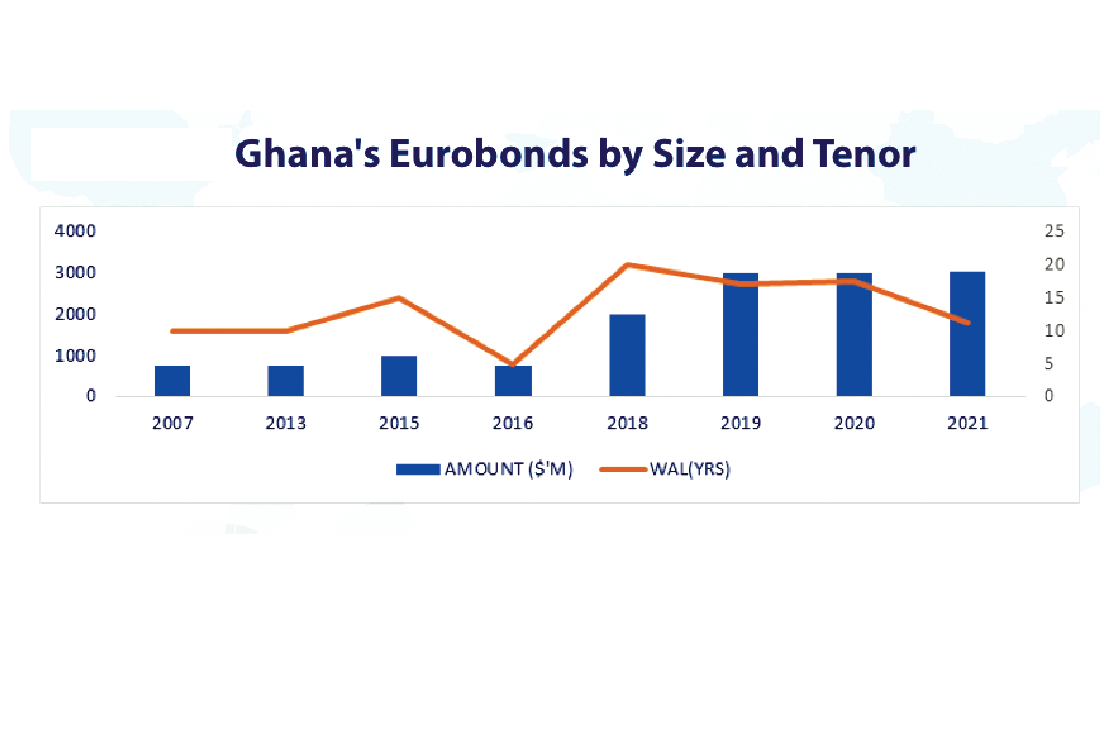 Coupon and discounts are direct payments to investors for liquidity advanced and risks taken. Ghana's debut bond was issued at par with an 8.5 per cent coupon.

The highest coupon on any issuance was 10.75 per cent in 2015. Coupons have generally hovered around the 8.5 – 9.0 per cent handle with a few outliers.

Then, of course, a much-touted zero-coupon bond was issued in March 2021, but this did not necessarily come cheap if you factor in the 22 per cent discount applied.

The fourth tranche of US$500 million 21-year bond issued earlier in 2021 had a discount of 3.41 per cent, making it the most expensive in terms of payment to investors, given that its coupon was 8.88 per cent, hence a total of 12.3 per cent.

Generally, the 2021 issuance was more expensive in terms of coupon rates than in 2020. This signaled investor weariness and the need to reward investors for generating the necessary uptake.

If this trend continues, and which appears to be the case, considering the worsening debt to GDP situation, future costs of Eurobonds will be trending upwards.

Transaction and other fees

Issuance of a Eurobond is a highly specialised technical area requiring the use of seasoned international capital market specialists of investment bankers, lawyers and analysts, amongst others.

The Finance Ministry, the local institution that spearheads Ghana's Eurobond activities, does not have adequate personnel with these capacities amongst its staff and thus relies heavily on external experts at a fee.

Besides fees paid to transaction experts, there are also listing fees paid to the exchanges on which Ghana's Eurobonds are listed.

In addition, jurisdictions where these exchanges are registered also need to grant regulatory approvals to the listing and charges levied for such approvals.

In some instances, external guarantees are needed, which was the case in 2015. This reduces the risks of the issuance to a level acceptable by investors.

However, such guarantees attract fees in favour of the guaranteeing institution.

Typically, all these transactions and other fees are in the region of 4 – 5 per cent of the gross Eurobond amount.

Over the past half-decade, Ghana has raised, cumulatively, US$14.3 billion from the international capital market in Eurobonds.

This puts payments of fees in the region of US$571 – 714 million. The fees are usually taken out of the proceeds of the Eurobonds issued, meaning we are paying coupons of approximately 8.5 per cent on these amounts going to payments of experts.

Maximising benefits of Eurobonds, Ghana's debt to GDP is approaching 80 per cent, and the country is primarily seen as a debt distress country.

On this premise, it will become difficult to access the international capital market, and any additional Eurobonds issuance in the near term will come at a much higher cost.

It is, thus, imperative to ensure that maximum value is driven from any borrowing by the government on a going-forward basis. To ensure the right benefits are obtained from the bonds raised in the international market:

● It is critical to increase the correlation between Eurobonds and economic growth. Issuing Eurobonds as a means of financing general fiscal gaps should be avoided. This will require the realignment of expenditure with Tax Revenue and improving domestic revenue mobilisation

● Eurobonds should only be issued to finance specific investment projects with rate of returns higher than the cost of financing. This will ensure that proceeds from the investments can pay off the principal and coupons of the Eurobonds used to finance the projects.

● Eurobonds should be used to finance the most productive projects in sectors with the greatest welfare impact and the ability to generate sufficient economic growth. The nationwide rail network is a project which could be financed using Eurobonds.

● Ghana should only go into the international capital market to raise funds during periods of low global interest rates. Proceeds of such can then be used to pay down more expensive debts. Raising more expensive debts just to meet existing debt obligations should be avoided

Chinese Loans China is increasingly playing a dominant role in financing large infrastructure projects across Africa, and Ghana is no exception.

As the world's largest official creditor, China has been the single most important bilateral lender to Africa in recent years, investing primarily in the energy, mining and transportation sectors.

Available estimates from John Hopkin’s China Africa Research Initiative (CARI) put China's total loans to Ghana over the 2000-2019 period to be US$ 4.8 billion.

About 47 per cent of this amount has been invested in the energy sector, with 18 per cent and 15 per cent injected into the transportation and communication sectors respectively.

This amount excludes the US$2 billion loan agreement signed in late 2019 to be repaid with proceeds from the sale of refined bauxite (Benefo & Addaney, 2021).

The main concern with Chinese loans involves commodity-linked debt. About one-third of Chinese loans are secured by export commodities in borrower countries and tied with Chinese goods and construction services (Brautigam & Hwang, 2016).