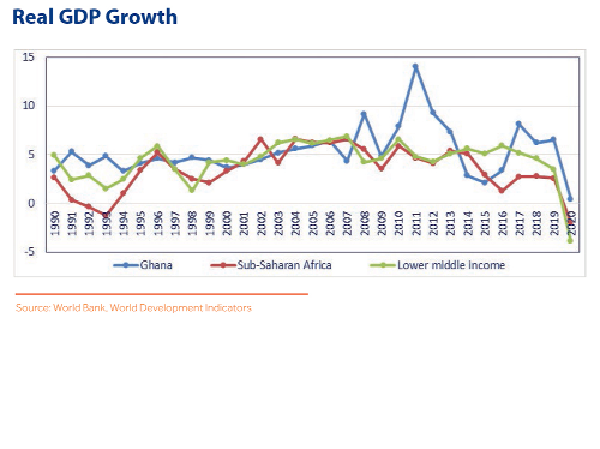 Over the past 60 years (1960-2020), average income as measured by real GDP per person has grown by approximately one per cent per year.

The implication of this average growth rate per year over the last 60 years is profound. The rule of 70 helps to understand growth rates and the effects of compounding. According to the rule of 70, if some amount grows at a rate of x percent per year, that amount doubles in approximately 70/x years.

So, when average income grows at one per cent per year, it takes 70 years to double.

A comparative analysis of countries in the sub-region reveals that Ghana has done poorly over the last six decades in average income performance.

However, it may be noted that the 2018 assessment of Ghana's growth performance by the African Development Bank placed Ghana within the category of countries with a single growth acceleration between 2004 and 2014 (AfDB, 2018). Growth acceleration refers to an increase in per capita (i.e., income per person) growth of 2 percentage points or more, with the observed increase in growth sustained for at least eight years and the post-acceleration growth not less than 3.5 percent per year (Hausmann et al., 2005).

Furthermore, to eliminate cases of pure recovery, the authors argue that the post-acceleration output level must also exceed the pre-episode output level. Against this background, we evaluate Ghana's economic and social performance over the last three decades.

It is worth mentioning that widening current account and budget deficits, rampant inflation, and depreciating currency resulting from uncontrolled government spending over a sustained period led to slower GDP growth from 2014 to 2016.

The rebasing of the economy in 2010, coupled with the steady growth in GDP, led to Ghana's classification by the World Bank as a lower-middle-income country by July 1, 2011 (World Bank, 2011).

Economic growth is considered the most powerful tool for reducing poverty (Adams, 2003; Ravallion & Chen, 1999). An influential study of 14 countries, including Ghana, identified growth as the primary driver of poverty reduction (World Bank, 2005).

The paper argues that, on average, a one per cent increase in per capita income reduced poverty by 1.7 per cent. Further, changes in labor income have been identified as accounting for nearly half the reduction in poverty in Ghana between 1998 and 2005 (Azevedo et al., 2013), with education being the primary determinant of the level of earnings and its growth (Falco et al., 2014).

Indeed, the population living in poverty dropped significantly from 70 per cent during the 1990s to 30 per cent over the 2010 to 2019 period (Table 2). However, sustaining growth is essential for Ghana to achieve the sustainable development goal of eradicating poverty by 2030.

A country’s inability to sustain growth over a long period will pose a challenge for eradicating poverty. It is important to note that both the pace and pattern of growth matter for poverty reduction (DFID, 2008).

In particular, the participation of the poor in the growth process is considered essential for reducing poverty. In the case of most developing countries, the agricultural sector employs most of the poor, most of whom are also women (World Bank, 2017).

Hence, policies targeting agricultural productivity and women would be critical for poverty reduction and necessary for structural transformation.

Honorati and Johansson de Silva (2016) argue that unlocking Ghana's agricultural potential will require infrastructure investments, particularly irrigation schemes and modern production methods. The case of the green revolution in lifting millions out of poverty in Asia provides sufficient evidence about the important role of agriculture in poverty reduction.

Higher productivity in agriculture is also an essential determinant of the pace of structural change as productive resources, including labor, move out of agriculture to other more productive sectors, thereby improving overall economic growth (Honorati & Johansson de Silva, 2016).

Molini and Paci (2015) have also argued that sustained poverty reduction in Ghana requires a commitment to reducing inequality and improving access to opportunities for all citizens. Despite progress made in reducing inequality, significant regional and gender disparities remain.