24 graduates given lifeline at Asanko Mines 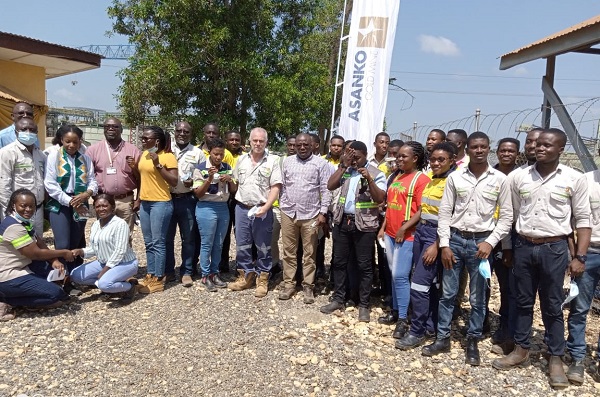 The beneficiaries in a group picture

Twenty-four graduates who have completed their national service with mining firm, Asanko been given a lifeline with a two-year training programme for employment in the firm.

In all, more than 100 such graduates have benefitted from Asanko's new initiative since 2017 to conform with the new mineral and mining legislative Instrument 2431(2020) to improve the local content law.

The law enjoins mining firms to submit a budget of training of such people and collaborate with the country's universities to develop Ghana's manpower in that field.

At the official launch of the programme at Manso Abore in the Amansie West District of the Ashanti Region on Thursday, the Organisational Capability Manager of Asanko, Mr Mohaiden Mohammed, said the beneficiaries included 80 per cent of those who had had their service with the company and 20 per cent from within the communities where it operates.

He said the move was to improve on the ratio to 70:30 by next year, hoping to reach a 50:50 percentage ratio in three years.

Currently, females constitute 33 per cent of the beneficiaries with the hope of reaching a female-male parity within the same three years.

Per the internal arrangements, the mines is expected to absorb a chunk of them into the "system" and others are to be engaged by contractors working with the mines while those unable to meet the benchmark will move out into the open job market to look for jobs.

Those who have qualified as permanent staff were presented with their certificates at the programme.

Mr Mohammed said it was the practice more than 20 years ago among some mining firms including AnglogGold Ashanti, but it has been stalled for many years.

He said the focus will be to engage 60 per cent of those in the sciences with 40 per cent within the humanities.

He urged the newly trained graduates to adjust quickly to the new technology trends to remain relevant.

The General Manager of Asanko, Mr Andrew McGowan, urged the beneficiaries to hold their heads up and high to scale up their personal development.

He said soon, reality will dawn on them during work but encouraged them never to look back.

In a message sent to the launch, the Executive Vice-president and Managing Director of Asanko Mines, Mr Frederick Attakumah, who mooted the idea for the reactivation of the graduates training programme, challenged the beneficiaries to live up to the billing by impacting the company positively.

He said the company would roll out regular training regimes to make employees relevant in a digitalised world.