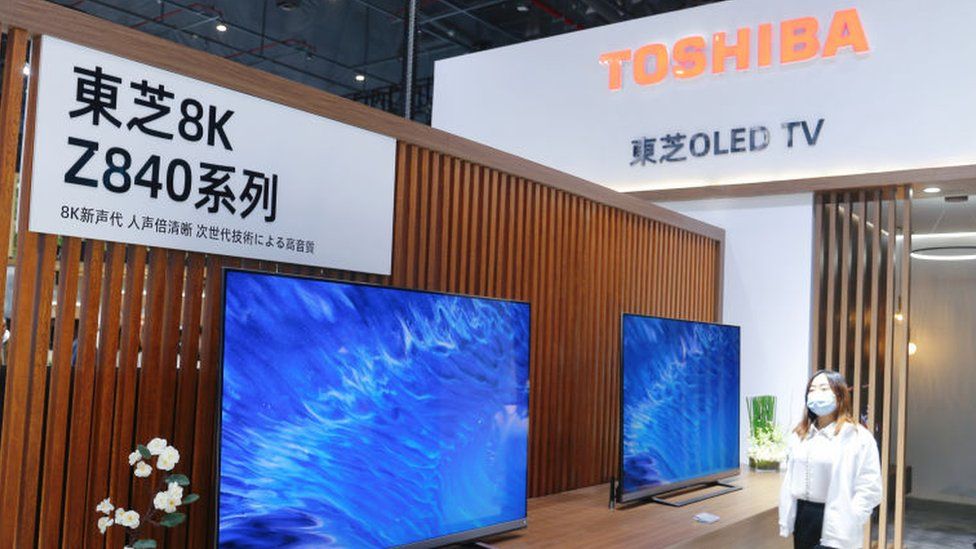 Toshiba said the three companies would be focused on infrastructure, semiconductors and devices.

The company has come under increasing pressure from activist investors to make changes since an accounting scandal in 2015.

This week, US giant General Electric announced a similar strategy that will see the historic company broken up.

Toshiba's plan will see it spin off two core businesses - its energy and infrastructure unit as well as its device and storage operation.

After shedding those two companies, Toshiba will continue to own a 40.6% stake in memory chipmaker Kioxia as well as other assets.

It expects to complete the reorganisation by the second half of 2023.

The move is aimed to increase the stock market valuations of Toshiba's different businesses after facing pressure from shareholders.

But some analysts are concerned about the timescale for the changes.

"The move is in the right direction, but it seems slow," said Atul Goyal of investment bank Jeffries, who would have preferred a timeline of three-to-six months.

"2023 is a long way out and we are not sure what else will change between now and then."

Toshiba is one of Japan's oldest and largest firms, with divisions that range from home electronics to nuclear power stations.

However, the company has faced wrenching changes in recent years as it dealt with the fallout of an accounting scandal and huge losses linked to its US nuclear unit.

In 2015, then-chief executive and president Hisao Tanaka resigned after Toshiba said it had overstated its profits by more than a $1bn.

In April of this year, UK private equity group CVC Capital Partners made an unsolicited $20bn takeover bid for Toshiba.

A week later, the company's chief executive Nobuaki Kurumatani resigned amid controversy over the bid.

Toshiba then rejected CVC's offer, which angered some activist shareholders.

In June, a shareholder revolt saw chairman Osamu Nagayama ousted from his position.

On Tuesday, US conglomerate General Electric announced that it would split into three separate companies.

The company said it will spin off its healthcare business in early 2023 and combine its renewable energy, fossil-fuel power and digital units into one company that will be spun off the following year. The remaining business will be its jet engine maker GE Aviation.

The move marks the breakup of an iconic manufacturer which was founded by Thomas Edison. It went on to become a sprawling business empire that was once the world's most valuable company.