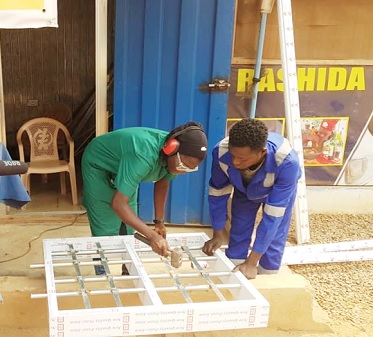 Ms Iddrisu (left) at work with one of her apprentices
30.5k Shares

MS Kande Iddrisu, a master craftswoman with three male apprentices, is making a mark in the male-dominated buildings and supplies industry in the country.

She is gainfully self-employed, training others and creating jobs in aluminium works such as sliding doors and louvre windows, office partitioning, swing doors, balustrades and projected windows.

Ms Iddrisu, who is a former footballer in her early 30s, decided to learn the aluminium works for four years at Ashaiman in Accra, after her high school education at the Damongo Senior High School (SHS) in the Northern Region in 2014.

She pursued the trade against the notion that it was a job exclusively reserved for men.

“My family expressed shock when after SHS I declared my intention and desire to learn aluminium works, while trying to let me understand that it was a man’s job”, Ms Iddrisu revealed to The Mirror, in an interview in Accra.

“They asked me if I had seen any woman doing aluminium works? You can’t learn that,” she said.

Bias
According to Ms Iddrisu, when her family finally agreed to let her learn the job, she had to contend with negative comments and treatment at her workplace as three of her seniors (males) refused to mentor her for seven months.

“They constantly found ways to make me quit with a daily reminder that it was a man’s job”, she recounted, adding that those seniors also suggested that she should go into tailoring or other perceived female jobs.

Ms Iddrisu takes delight in what she does

Though it became hard for her as she was relentlessly going to the workplace in fear, one thing she knew for sure was that aluminium job was what she wanted to do.

According to her, aluminium works were full of fun and there was nothing more amazing than creating a masterpiece with your own hands.

“Today, I am happy that I did not give in to the setbacks and biases, and I am glad to have completed. Business is doing well. I do not depend on my brother anymore. I am more than happy. I do not even know how to express myself,” she told The Mirror.

Asked about the relevance of aluminium works, she was of the opinion that it was very useful, especially in a very hot tropical climate like Ghana.

She emphasised that her services were much more needed as the aluminium frames with louvre blades made them ideal for ventilation, while integrating burglar proof and mosquito nets for security and health protection.

Challenges
Recounting her challenges, she stressed the need for awareness to be created in a manner that eliminates certain misconceptions that seek to create the impression that a woman cannot provide neat and decent services in the aluminium job.

One of Ms Iddrisu’s finished products

She explained that society must begin to realise that the gap is there and must be fixed by breaking the cycle of reserving certain jobs for females and let women, especially the younger ones, know that they stand the chance to be good in any field of their choice.

“When they see that you are a woman, it is difficult for them to give you the job. Sometimes those who will give me their jobs too will tell me that they are not leaving and truly they will watch me execute it. For some, when I show up, they are quick to say ‘no I cannot give this job to a woman, I prefer a man’. They just feel a man can do it better. It is challenging,” Ms Iddrisu added.

Trends
She indicated that keeping up with trends was important in the aluminium industry, explaining that she updated herself with designs by researching online and learning from others to be a step ahead while proving critics wrong.

With the support of her brother, Marouf, Ms Iddrisu now runs her own business under the name Marouf Aluminium Fabrications to show appreciation to him because he set her up in the aluminium works trade at Ashaiman.

“Things have changed and there is nothing like this is for boys or girls. Whatever you want to do, take up and do it,” she urged.