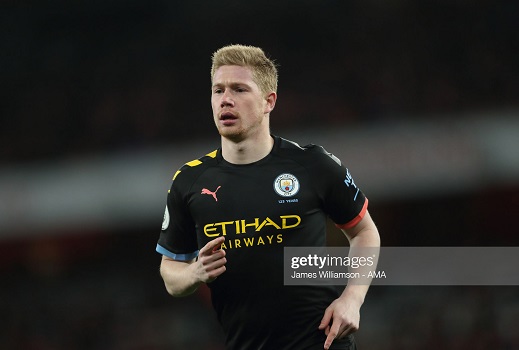 Manchester City midfielder Kevin De Bruyne will start in today’s UEFA Champions League game at RB Leipzig as he works his way back from a bout of COVID-19 but striker Gabriel Jesus has been ruled out with a knock, manager Pep Guardiola said.

De Bruyne missed four games in all competitions after contracting Covid-19 during the international break last month, but came off the bench in Saturday's 3-1 Premier League win at Watford.

“Kevin got coronavirus... it is a setback because people who get corona feel empty. But he will start tomorrow and we will see how many minutes he can play,” Guardiola told reporters yesterday.

“Now he has to fight for position like everyone but he doesn't have to show anything to me. He has to show himself, that is it. The competition is so necessary and he knows it.”

With City already assured of a spot in the last-16 after topping Group A when they beat Paris St Germain in their last game, Guardiola said five academy players will travel for Tuesday's game in Leipzig.

The game will be played behind closed doors after the German state of Saxony went into partial lockdown last month following a rise in Covid-19 cases in Germany.

Defender Oleksandr Zinchenko said the decision is "sad news" for both teams and fans.

“We play for the fans but the main reason is for our health. I wish everyone is going to be healthy,” he said.

Leipzig will be led by assistant coach Achim Beierlorzer after the German club mutually agreed to part company with head coach Jesse Marsch on Sunday following a poor start to the season.