BY: Peter Sarbah
Category: Sports News
Officials of the GFA and Malta Guinness jointly unveiling the logo at the unveiling ceremony
30.5k Shares

The Women’s Premier League received a major boost following the injection of GH¢10m sponsorship package by the producers of non-alcoholic beverage, Malta Guinness.

The deal, which takes effect from the 2022/23 season, will see the company headline the sponsorship of the women’s league for three seasons.

At the unveiling ceremony in Accra on Friday, the Marketing Director of Guinness Ghana, Estella Muzito, explained that their decision to rescue the women’s game from lack of sponsorship was in line with the mission “to fuel a world the good”.

“Malta Guinness’ decision to sponsor the Women’s Premier League in Ghana is in line with our mission to fuel a world of good. The incredibly talented women who play the game, the officials, the Football Association and the fans will be energised in their support of their favourite teams and Malta Guinness will be there to refresh them all the way," she stated. 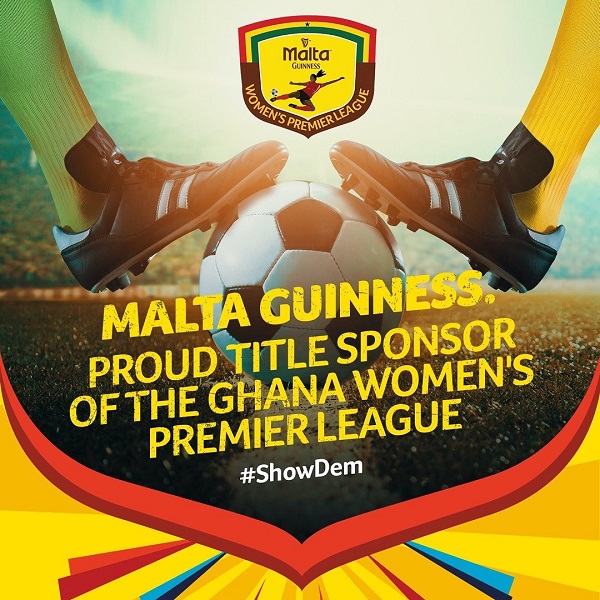 She was happy about how women’s football had generated the needed attention and was attracting thousands of fans to the stadia and emphasized how football in the country continue to be use as a tool to unifier people from all walks of life.

“Women’s football has in recent years taken its much-deserved place as a premium sporting spectacle which attracts thousands of fans and supporters."

The Ghana Football Association (GFA) president, Kurt Simeon-Okraku, said his outfit has been committed to ensuring the growth of the women’s game which explains the increase in the numbers as well as supporting to enroll them on the Youth Employment Agency (YEA) for monthly stipends.

“The leadership of the Ghana Football Association has showed commitment to the growth of the women’s football for which reason we increased the number of participating teams from 16 to 20.

"Another timely intervention from the GFA was to supply free footballs and other valuable equipment to these clubs.

"We enrolled players on the YEA for monthly allowances and also made the matches of the women’s premier league available on Max TV."