Ghana's Black Starlets defeated Togo 3-0 to earn a place in the semi-final of the ongoing WAFU Zone B U-17 Cup of Nations at the Cape Coast Stadium on Friday.

The Starlets bounced back from a 2-4 drubbing by Nigeria in the opening game of the tournament with a command performance.

Ghana coach Paa Kwesi Fabin made three changes to his team as goalkeeper Shaibu Rafique, Richard Aweh and Abdul Razak Salifu were given a place in the starting line-up. The hosts appeared a changed side as they dominated possession but failed to find the back of the net in part to good defending by the Togolese whose goalkeeper Komlan Kitti expertly fisted away his powerful effort.

However, nine minutes into the second half, Pius Adua opened the floodgates when he tapped in an assist from teammate Andrews Appiah.

Razak Salifu doubled the lead for Ghana in the 77th minute after a solo run to hit a ground shot beyond the reach of a bemused Togolese goalie who watched the ball sail into the net. 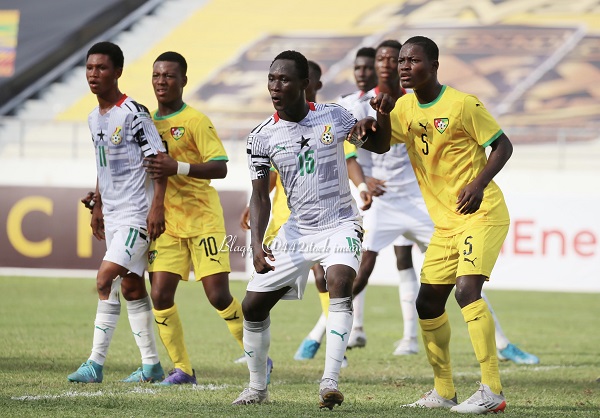 Cheered on by the crowd, the Starlets probed for more goals and their effort was rewarded with another goal in the 80th minute through Collins Agyemang made it 3-0 from a well taken spot kick.

The win guaranteed Ghana a place in the penultimate round of the competition as the second placed team in Group A with three points behind leaders Nigeria (six points).