VIDEO: Could this be Hudson-Odoi's last Chelsea goal 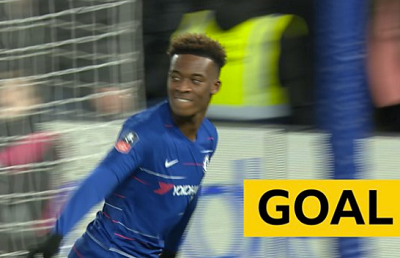 Hudson-Odoi, 18, showed the type of poise which has led to a £35m bid from Bayern Munich by collecting Andreas Christensen's diagonal pass and cutting inside before firing past Keiren Westwood for his second goal of the season.

Chelsea boss Maurizio Sarri was rewarded for handing Hudson-Odoi a sixth start of the season as his goal put the result of a feisty game beyond doubt.

Earlier, Willian scored the first of his two goals from the penalty spot, before making it 3-0 after a smart one-two with Olivier Giroud, who replaced debutant Gonzalo Higuain.

The opener, Willian's 50th goal for Chelsea, came in controversial circumstances after the visitors had earned their own spot-kick 162 seconds earlier, only for it to be overturned by VAR.

Watch all the goals below;