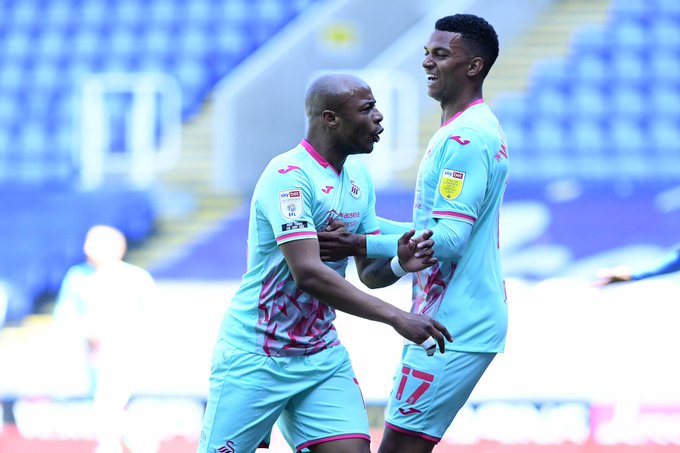 Black Stars skipper Andre Ayew came off the bench to score his 16th goal of the season as Swansea City secured a play-off place courtesy of a 2-2 draw at Reading on Sunday in the English Championship.

The Swans created plenty of chances in the opening half but fell behind to Yakou Meite's 31st-minute header.

With Swansea needing just a point to guarantee themselves a place in the top six, Steve Cooper - on his 100th competitive game in charge of the club - made a triple substitution in the second half which included Ayew - who missed the loss to Queens Park Rangers with a hamstring injury - being summoned from the bench.

The experienced attacker made a telling impact by playing a key role in the move which saw Jamal Lowe fire home on 67 minutes.

And the vice-captain notched his 16th league goal of the campaign late on to put Swansea ahead, although substitute Tomas Esteves set up a tense finish with a strike two minutes into injury time.

But Swansea held on to claim a draw which ensured they earned a play-off place at the home of the Royals for the second season running.

Steve Cooper's Swansea will face either Brentford, Bournemouth or Barnsley in the playoffs for promotion to the English Premier League.

The draw sees Swansea climb a place to fifth while Reading, who topped the table in the early stages of the season, stay seventh.

Swansea had been in top-two contention for much of the campaign, but their recent poor form means a second successive crack at the playoffs.

They sealed their top-six spot on this ground last season, when a memorable 4-1 victory saw them overhaul Nottingham Forest in the closing minutes of the campaign.