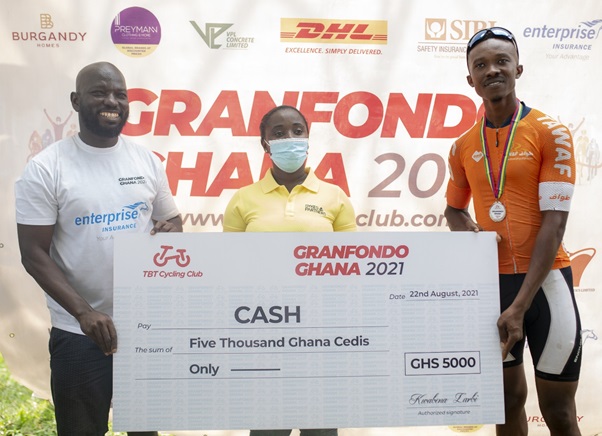 The first half of the race on Sunday was fraught with aggressive riding in the peloton with one attack after another, and riders eager to form a breakaway from the peloton but every move was tracked down and blocked almost immediately. The breakaway eventually formed on the Apirede climb but the peloton stayed together as they hit the lower slopes of the second category climb. When the race hit the steepest sections of the climb averaging 11% for 2km, the race was then split with riders littered across the entire hill. The stand out performers were: Maxwell Doku of FCG Cycling Club; Prince Quaye of TBT Cycling Club; and Abdul Malik from Nigeria. They were the strongest and formed a breakaway opening a gap of 1min 20sec on the chasing group behind. However, a few kilometres down the road, Prince Quaye of TBT couldn’t follow the pace-setting of Maxwell Doku and Abdul Malik, and was dropped from the trio.

At 20km to the end of the race, Abdul Malik was the next to fall off leaving Maxwell Doku as the sole leader of the race at this point. Behind the duo there was a furious chase from a group of 4 riders including pre-race favourite Abdul Rahman of Quickstep Cycling Club, Victor Cudjoe of Gladiators Pro Cycling Club, Prince Kudufia of Team Epic Cycling Club and Francis Owusu of River Park Cycling Club working hard to close the gap rapidly on the solo leader and he was caught at 14km towards the end of the race. At this point the race became animated and it was a cat and mouse game as Prince Kudufia, 17-year-old from Team Epic Cycling Club attacked the now leading group of 5 opening a five second gap and pulling away with Victor Cudjoe and Abdul Rahman. The two chasers worked together to bring him back and on the home stretch it became a bunch sprint as Victor Cudjoe, the 30-year-old Policeman riding for Gladiators Pro Cycling Club showed his class and outsprinted the 5 riders to cross the line in a time of 2hr 47min 41sec to finish the demanding course in an average speed of 35.78km/h. Abdul Rahman and Prince Kudufia finished second and third respectively wrapping up the podium places.

In an interview, the Race Director, Kwabena Larbi expressed his heartfelt gratitude to the sponsors for making the race possible.

He was hopeful that the success of the event will encourage corporate sponsors to participate in next year's race.