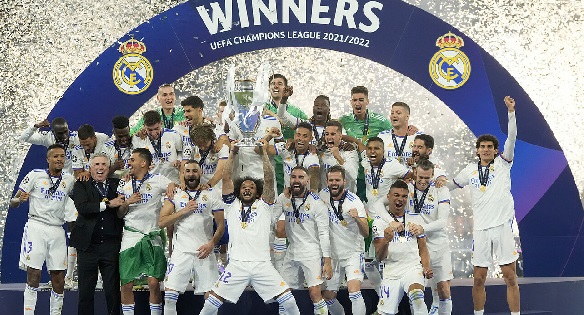 Liverpool fans have been told to “book the hotel” for next year's UEFA Champions League final in Istanbul by Reds manager Jurgen Klopp.

Real Madrid beat Liverpool 1-0 in the final in Paris to deny the English side a second title in three years.

It means they finish the season having won the FA Cup and League Cup.

“I have a strong feeling we will come again. The boys are competitive. We will have an outstanding group next season,” said Klopp.

“Where's it [the final] next season? Istanbul? Book the hotel.”

A week before last Saturday's loss, there was still talk of Liverpool being able to win the quadruple as they were also in the running for the Premier League title.

That was reduced to a potential treble last Sunday when Manchester City clinched top spot on the final day of the league season.

Liverpool had plenty of chances in the first half against Real at the Stade de France, but found goalkeeper Thibaut Courtois in outstanding form as the former Chelsea player made several superb saves.

While the Reds complete the campaign with two trophies, Klopp admitted it was too soon for his players to be able appreciate what they have achieved.

“In the dressing room nobody feels it was a great season at the moment,” Klopp added on BT Sport. “We maybe need a few hours for that.

“We played a good game, not a perfect game. The boys tried everything, especially at 1-0 down then we played like we wanted to play before.”

Liverpool defender Andy Robertson admitted the defeat was a difficult one to take.

“The dressing room is quiet, devastated,” the Scotland left-back said. “That is what happens when you don't win finals.

“We had chances, came up against an unbelievable keeper. Being honest though, we could have played better.

“We are a pressing team, it has worked so much for us but we have been caught [at the] back post and that's football.

“It is hard to get back in the game playing against against a very experienced team, they know how to see out a game.”