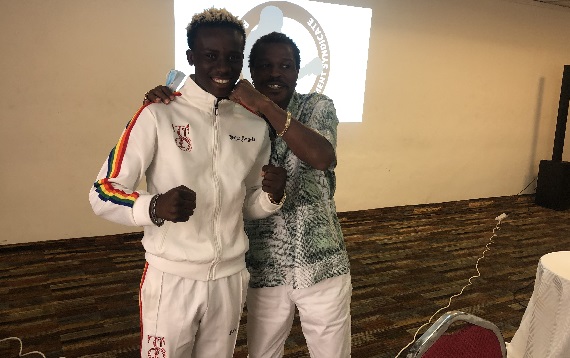 Olympics bronze medalist Samuel Takyi says he is ready to give a good account of himself when he makes his debut as a professional boxer against Kamaldeen Boyefio in a super featherweight contest on April 15 at the Accra City Hotel.

Takyi, who will be fighting on a Bazooka Promotions and Management Syndicate bill, predicted an emphatic win against journeyman Boyefio (11-10, 22 KOs).

Speaking at his introduction to the media yesterday, the 20-year-old fighter called on Ghanaians to continue supporting him at the professional ranks to help him win a world title for the country.

Takyi added that he was convinced the decision to switch to former IBF welterweight champion Ike Quartey as his trainer would pay off in leading him to a world title glory.

“I am ready to face Kamaldeen because I have been training all this while after the Olympics,” said Takyi.


“It is going to be a big win for me on my debut and I can’t wait to enter the ring. Everyone must come and support me on my debut professional fight. I decided to be with Ike Quartey because he has what it takes to make me a champion. Everything has been fine since I decided to sign with him,” he added.

Ike Quartey, owner of Bazooka Promotions and Management Syndicate, described Takyi as a world champion in the making who needs a little push to achieve his dreams as a boxer.

The former world champion and trainer of Takyi said he was hopeful he could use his expertise in the sport to transform the youngster’s career into a world beater.

“He is a world champion in the making and all he needs is the little push from me to achieve his world title dreams. He is ready for his debut fight and I can tell you it is going to be an interesting fight. Let’s all come together to make him achieve his boxing dreams,” Quartey said.