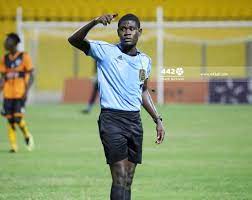 Referee Selorm Yao Bless has been nominated to officiate the Super clash game between Asante Kotoko and Accra Hearts of Oak at the Baba Yara Stadium on Sunday.

Bless was the same man who handled the game between the two sides at the Accra Stadium last season which ended in a goalless draw.

After the game he won the admiration of many including the FA president, Kurt Okraku following his level of officiating.

During last season's game, referee Bless boldly gave Asante Kotoko an early penalty in the third minute of the game which was wasted by Kwame Opoku and later gave Hearts another which was also wasted.

After the game the FA president posted on his Facebook page "The match officials who did today's Super Clash have brought respect to the trade. Much respect and Kudos to the appointment Committee. Continuous investment in these officials will make them better and this is our vision", Okraku wrote.

Referee Bless is said to have the record of Most Matches officiated last season (14 games) and most penalties awarded (eight).
He will be assisted by Patrick Papala and Tijani Mohammed with Musah Mubarak expected to be the fourth referee.

Adam Mukaila will be the Match Commissioner while Nathaniel Gyasi has been nominated as the venue Media Officer.