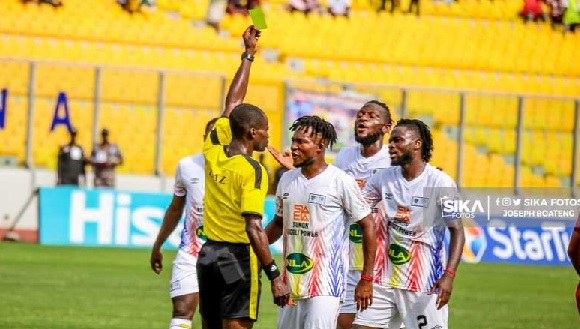 The Ghana Football Association (GFA) has suspended referee Joseph Kenny Padi for the rest of the league season after the FA's Match Review Panel ruled that the official erred in awarding a penalty to Asante Kotoko in their Ghana Premier League match week 24 game against Hearts of Oak.

Referee Padi handed the Porcupine Warriors a 14th-minute penalty when Hearts player Nurudeen Abdul-Aziz won a ball in their 18-yard box from Fabio Gama who then fell in the process.

The Phobians protested the penalty kick which won the match for Kotoko and sent a complaint to the GFA. Upon assessment by the Match Review Panel, the GFA announced that referee Padi was inconsistent in his defence for awarding the penalty.

“Referee Kenny Padi awarded a dubious penalty to Asante Kotoko when Hearts of Oak player, Nurudeen Abdul-Aziz won a ball in their 18-yard box from Fabio Gama of Asante Kotoko.

“The referee insisted that the Hearts player stepped on the foot of the Kotoko player which he later agreed that there was no stepping of foot after watching the video. He then defended that there was a push and pull at a point, which the video clearly showed that it was not the case,” parts of the statement read.

The ruling added that Abdul-Aziz challenged Gama fairly without fouling the Kotoko attacker and suggested a premeditated attempt to fake a foul.

“Per the video watched in relation to the 14 minutes incident, Nurudeen Abdul-Aziz of Hearts of Oak challenged player number 10 of Asante Kotoko fairly and there was no foul committed which warranted any penalty.

“The panel concluded that, per the video watched, and the referee’s defence is in contrast, the panel holds the view that the referee erred in awarding the penalty. This error changed the outcome of the match. Therefore, referee Joseph Kenny Padi is suspended for the rest of the season,” the decision said.