Qatar 2022: Portugal qualifies for next round; Ghana, Korea Uruguay battle for one slot 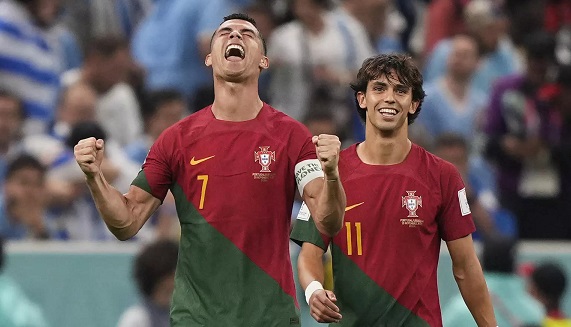 Qatar 2022: Portugal qualifies for next round; Ghana, Korea Uruguay battle for one slot
30.5k Shares

Bruno Fernandez scored twice as Portugal became the third country to book their place in the Round of 16 of the FIFA World Cup Qatar 2022 following a 2-0 win over Uruguay.

The Portuguese join heavyweight duo France and Brazil as the only countries that have sealed qualification so far.

Rodrigo Bentancur had the best chance of a tense first half, the Tottenham Hotspur midfielder weaving between Ruben Dias and Nuno Mendes only to be denied at close quarters by Portugal goalkeeper Diogo Costa.

Joao Felix shot into the side netting after 52 minutes but Fernando Santos’s team broke through soon after when Fernandes lifted in a cross that travelled past Sergio Rochet in Uruguay’s goal, with Cristiano Ronaldo straining to make contact.

Uruguay sent for the cavalry and a trio of substitutes had opportunities of varying degrees of difficulty to level. Maxi Gomez thudded a first-time 18-yarder into the upright, Giorgian de Arrascaeta could manage only a tame attempt when clean through, enabling Costa to save, and Luis Suarez controlled and shot in one movement but rippled the outside of the net.

Fernandes was presented with the chance to wrap up the points when the luckless Jose Maria Gimenez was penalised for handball in the box. And the Manchester United player, who would thud the post with a hat-trick attempt, rolled his penalty into the bottom left corner to confirm Portugal’s smooth passage out of Group H.

Portugal's Pepe became the oldest outfield player for a European team at the FIFA World Cup at the age of 39 years and 275 days.

Player of the Match