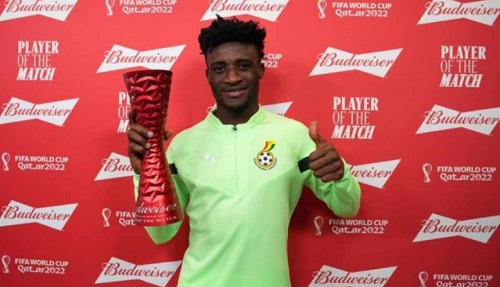 Black Stars talisman Mohammed Kudus became the first Ghanaian in history to score two goals at the FIFA World Cup when he bagged a brace in a 3-2 victory over South Korea at the Education City Stadium.

Kudus, 22, was also named the Man of the match of the Group H tie on Monday afternoon.

Speaking to FIFA in an interview after receiving his prize, the Ajax star said the focus of the team was already on the final group game against Uruguay.

The Ajax forward said the MOTM prize was a collective award because all his teammates played a part in ensuring that the Black Stars won the game.

"We are approaching one game at a time, we got the three points today and the focus is on Uruguay," Kudus said.

"So, we'll go in with the same mentality and attitude. I know everyone is up for it...".