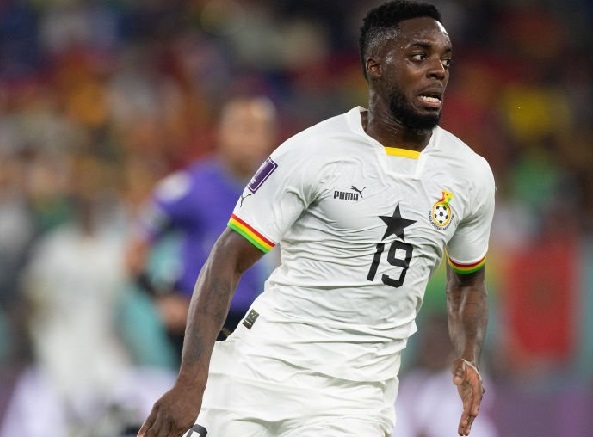 Inaki Williams is yet to score for Ghana
30.5k Shares

Ghana coach Otto Addo has high expectation of his lead striker, Inaki Williams, to come good at the World Cup and hopes the former Spain international will find his scoring boots in Qatar as the Black Stars look to discover a reliable goal scorer to replace Asamoah Gyan.

The coach also said he was not sad that he failed to convince Inaki’s younger brother, Nicholas (Nico) to choose Ghana over Spain for his international career even though he would have been happier to have the Williams siblings in the national team just as the Ayew brothers, Andre and Jordan.

Williams was born in Spain to Ghanaian parents but only made himself available to play for the Black Stars in July after completing his international switch, almost eight years after Ghana first baited him to play for his motherland instead of his country of birth.

For Coach Addo, he is hoping that Inaki translates his rich scoring credentials in Spain where he plays for La Liga side Athletic Bilbao to the national team, starting at the ongoing FIFA World Cup – the 28-year-old has scored 58 goals in 285 appearances for Bilbao since 2014.

Inaki is expected to be handed his fourth starting role in five appearances for Ghana against South Korea on Monday with his coach hoping the player would end his scoring drought and help provide the needed goals to fire Ghana’s campaign in Qatar.

“He scores a lot of goals and provides assists for Athletic Bilbao alongside his brother. I’m looking forward to seeing him scoring at the World Cup also,” said Coach Addo who described the player as a “very intelligent and powerful striker” whose assets included with good runs and good positioning between the lines on the field.

Despite initially turning down an opportunity to play for Ghana, Inaki seems to be at home with the Black Stars – he made just one appearance for Spain in 2016 – and the coach is convinced the player finally made the right decision concerning his international career.

For the 47-year-old coach, his admiration for the striker is rooted in his personality and not just his talent.

“He connects well with the players, has good work ethic and a good character and has integrated well.

“When I talk to him, he looks like joining Ghana has given him more strength,” Coach Addo said.

The Ghana coach, whose background is similar to the Williams brothers -- Addo was born in Germany to Ghanaian parents but committed his international career to Ghana than his country of birth – says 20-year-old Nico’s choice to go separate ways with his brother was a tough career decision that must be respected.

“We talked to him and Inaki but he chose to stay with Spain. It’s a difficult decision, especially if you’ve been living in Spain all your life.

“It’s not like a club career where you can change clubs if it doesn’t go well; it’s a lifetime decision and it’s not easy”.

At the ongoing World Cup, the Williams family have split loyalties. Nico made his debut in November as a 69th minute replacement for Marco Asensio in Spain’s 7-0 thumping of Costa Rica at the Al Thumama Stadium in Doha. The following day, it was the older Inaki’s turn to live his dream in Ghana’s starting line-up against Portugal at the Stadium 974 in Doha even though he was on the losing side as Otto Addo’s side suffered a 2-3 defeat to Portugal.