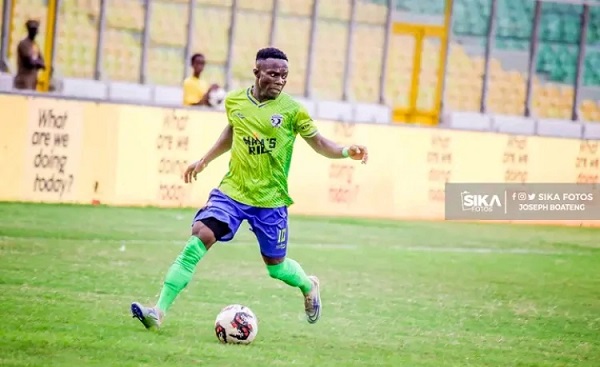 The Ghana Premier League could soon lose one of its most potent strikers after Bechem United’s top marksman Augustine Okrah as revealed to the Graphic Sports that he is relishing the chance to ply his trade outside next season as Tanzanian giants, Simba Club, has tabled an offer for his services and that discussions are currently at the concluding stage.

Okrah was one of the outstanding players in the just-ended Ghana Premier League season. He finished the competition as the third highest scorer with 14 goals as Bechem pleased third on the log behind Asante Kotoko and Medeama FC and reached the final of the MTN FA Cup.

Last week, Bechem United President, Kingsley Owusu Achau, hinted that the Tanzanian side had made enquiries about his star player, with Okrah confirming to the Daily Graphic yesterday that this agent had made progress working on the deal to enable him to sign a contract with Simba, which have won the Tanzania Premier League 22 times.

“There has been an offer from Simba Club of Tanzania, and as of now my agent is working around the clock to finalise the arrangements for me to leave the shores of Ghana,” said Okrah.

The 28-year-old player added that the management of Bechem United and his agent were working hard to push the deal through so he could complete the move to one of the biggest clubs in East Africa.

“For now I can say that the management of Bechem United is aware of the arrangement and I am hoping that it goes through smoothly for me to join Simba Club of Tanzania to offer me an opportunity to take my career to another level,” he said.

Even though the attacking midfielder had previously played for clubs in India, Sweden and the Sudan, he says he cannot wait to jump onto the exodus bandwagon again as age is not on his side to fulfil his career dreams.

“I am now aging, so with this offer I will gain something [money] to undertake some investments to provide security for me and my family in future,” he added.

If Okrah joins Simba, he will add to a growing number of Ghanaian players who in recent years have played in the East African country for top clubs Simba and Azam FC, joining compatriots including Nicholas Gyan, Kwasi Asante, James Kotei, Bernard Arthur, Razak Abalora, Daniel Yamoah, Yakubu Mohammed and Enock Atta-Agyei who have been star performers in the Tanzanian league in the last five seasons.

Okrah’s imminent exit will also rob the league of two notable goal scorers after AshantiGold forward, Yaw Annor, goal-king in the just-ended season with 22 goals, was transferred last Tuesday to Egyptian side, Ismaily, on a two-year deal reportedly worth $200,000.

Annor’s predecessor Diawisie Taylor, who won the goal-king in the 2020/21 league campaign with 18 goals, was transferred by Karela United for Egyptian side Future FC in October last year before being loaned to Al-Merrikh Sporting Club of the Sudan.

Two seasons ago, Nigerien Victorien Adebayor led the top scorer chart with 12 goals before the league was truncated by the Ghana Football Association following the outbreak of COVID-19 pandemic and the suspension of sporting activities. Subsequently, he was transferred by Inter Allies to Swedish side Vejle Boldklub, but has now returned to his native Niger to play for US Gendarmerie.