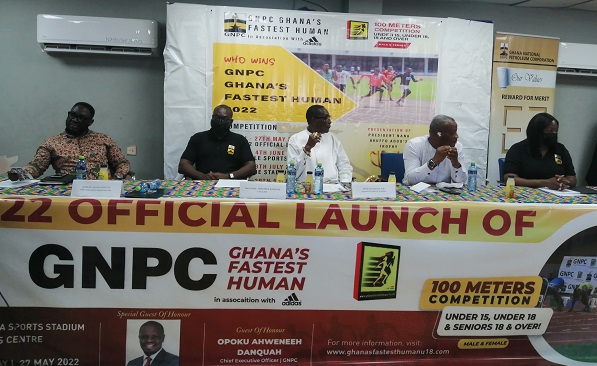 According to him, GNPC’s continuous support for the talent hunt programme had ensured the discovery of some talents. He, therefore, expressed the hope that more talents would be unearthed through the collaboration to represent the nation in international events.

Mr Ahmed Osumanu Halid, who represented the minister at the launch of this year’s edition of the GNPC Ghana’s Fastest Human at the Accra Stadium last Friday, seized the opportunity to convince Ghanaians that the country is ready to host next year’s African Games since so much had been done at the Borteyman site.

He stressed that the pessimists would be disappointed by the plans put in place as the nation prepares for the biennial games in Accra.

“All things being equal, Ghana will be hosting 54 other nations come next year and as a member of the LOC, I want to inform Ghanaians that our nation is ready and prepared to host this important competition.

“Currently, Ghanaians are a bit pessimistic because they are not seeing the infrastructure. But I can assure you that things are moving on smoothly,” he revealed.

He emphasised that Ghana would be well represented by some of the talents to be identified through the talent hunt to enable the nation to improve upon its medal haul.

The CEO of GNPC, Opoku Ahweneeh Danquah, was certain that his outfit’s continuous association with the programme would help unearth talents who could strengthen Ghana’s team at this year’s Commonwealth Games in Birmingham and the Paris 2024 Olympic Games.

“We believe that after the launch of this ninth edition, the right talents would be identified and developed so that Ghana gets a strong representation at the 2022 African Championships and the Commonwealth Games, the 13th African Games to be held in Accra and ultimately, the Olympic Games to be held in Paris in 2024.

“Beyond the national championships, GNPC is also sponsoring the GNPC Speedsters Club where the overall best performers selected by a team of technical experts will be placed on a year-long residential training programme to help with their skills, sharpen their techniques, put on a diet and a psychologist helping them with their mental conditioning,” he added.