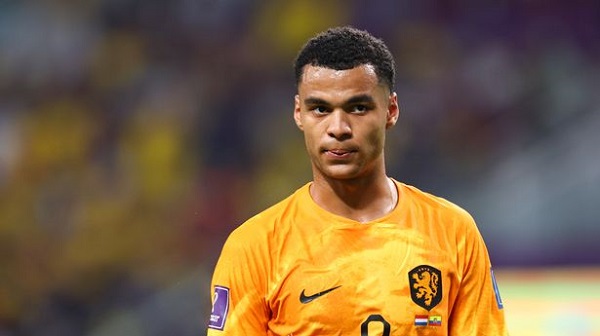 Manchester United are to hold talks in the coming days over their proposed move for Holland international forward Cody Gakpo.

The departure of Cristiano Ronaldo has left United requiring another goalscorer and PSV Eindhoven's Gakpo is emerging as their number one target.

The 23-year old, who is expected to start for Holland against Argentina tomorrow, has scored three goals during the World Cup and has been utilised as a central striker by coach Louis van Gaal.

He was on United's list in the summer, and indeed they held tentative talks with PSV in August, but ultimately prioritised the £82million signing of winger Anthony from Ajax.

Leeds United and Southampton both made bids to sign Gakpo in the final throes of the summer window but he opted to stay and gain more regular game time in Holland while waiting for future offers from clubs challenging for Champions League football. Van Gaal also advised him to stay to protect his place in Holland's World Cup squad.

That decision looks to have paid off for PSV with 6ft 4ins Gakpo scoring 13 goals so far this season and his value increasing with his exploits in Qatar.

The Dutch side rejected a bid of £26m plus a further £11m in bonuses from Leeds in August with director of football Marcel Brands claiming only £2m of the added bonuses were considered realistically achievable. Their value now is likely to be closer to £50m with their preference to sell in the summer. However, they recognise, after a good World Cup, Gakpo's stock will be high next month.

United, whose squad and coaching staff are currently on a warm weather training camp in Spain's Andalusia, spent heavily in the summer and would hope to strike a deal at closer to £40m if their budget allows so negotiations won't be straight forward. They do have room on their wage bill though after shedding Ronaldo's £500,000 a week salary.

Meanwhile, PSV have agreed to let Everton defender Jarrad Branthwaite cut short his loan spell. The 20-year-old centre-back is looking to go out on another loan in January and has interest from a number of clubs in England and abroad.

Branthwaite has started four games for Ruud van Nistelrooy, including the 2-0 Europa League win over Arsenal, but has grown frustrated at being utilised predominantly from the bench.

Jose Mourinho's Roma are among those to have expressed interest in the 6ft 5ins England U20 international.