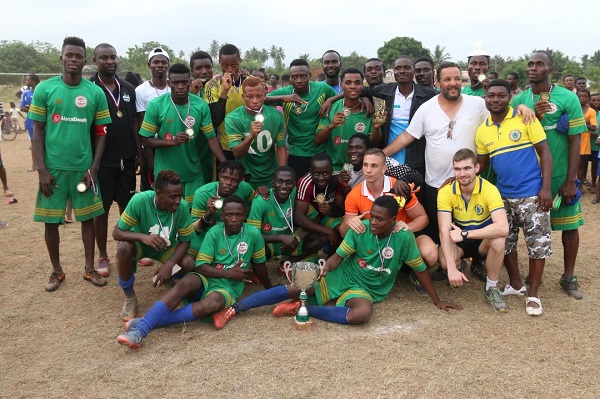 The two teams could not be separated in regulation time with the game ending in an intriguing 2-2 draw before the Academy boys defeated the Rangers in the penalty shootout.

On route to the finals, Lizzy Sports Academy defeated GHC FC 1-0 win in their opening game before thrashing Royal Success FC 4-1 in the second game, they, however, lost their final group game 1-0 to Krystal Palace.

They continued their championship quest by beating Royal Life FC 1-0 quarterfinals and recorded the same scoreline against Krystal Palace in the semifinals before accounting for Phar Rangers.

Fair play team of the tournament Skyboom FC took the third spot with a 1-0 defeat of Krystal Palace.

FIFA accredited agent and scout Mr Said Hadjarab who supervised the tournament said he was impressed with the performances of all the players during the competition especially the very best of players that were selected by a team of technical heads.

The President of Skyboom FC, Mr Obed Okpoti Sorsey expressed delight at the massive turn-out and the talent that were on display.

Due to the massive turn-out and the desire of the scout to watch more players, Mr Okpoti Sorsey revealed that he will hold yet another tournament in six months time to offer the scouts more opportunities to have a look at other talents.