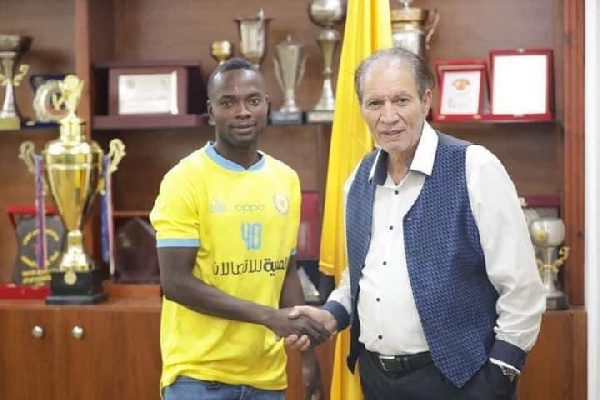 The Ghana Premier League has lost its most prolific goal scorer after AshantiGold’s Yaw Annor completed a move to Egyptian topflight side Ismaily FC on Wednesday.

Ismaily confirmed on Twitter yesterday the signing of the contract documents by the player, AshantiGold President, Kwaku Frimpong; and his Ismaily FC counterpart, Yehia El-Komy.

“The first deal of the new season.. Ismaili capture the top scorer in the Ghanaian league, Yao Annor,” the club wrote on its social media pages with accompanying photographs of the player in his new club jersey.

Annor scored 22 goals for relegated AshantiGold in the 2021/22 Premier League to win the goal-king award on the final day of the season to beat the leading contender Franck Mbella Etouga of Asante Kotoko who had scored 21 goals before the final week matches.

The 22-year-old forward, who was part of the Bechem United side that won the 2016 MTN FA Cup, previously had stints in Spain for third tier sides, CF Fuenlabrada and Burgos CF.

His departure robs the Premier League of one of its top stars and also provides him with an escape route to continue his career following the relegation of AshantiGold to the third tier of Ghana football for match-manipulation in a league fixture against relegated Inter Allies two seasons ago.

His predecessor Diawisie Taylor, who won the goal-king in the 2020/21 league campaign with 18 goals, was transferred by Karela United for Egyptian side Future FC in October last year before being loaned to Al-Merrikh Sporting Club of the Sudan.

Two seasons ago, Nigerien Victorien Adebayor led the top scorer chart with 12 goals before the league was truncated by the Ghana Football Association following the outbreak of COVID-19 pandemic and the suspension of sporting activities.

Subsequently, Adebayor was transferred by Inter Allies to Swedish side Vejle Boldklub, but has now returned to his native Niger to play for US Gendarmerie.